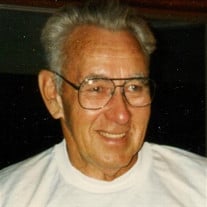 ADRIAN – John “Jack” H. Robinson, age 90 of Evans Lake, formerly of Tecumseh, passed away Tuesday, December 5, 2017, at Lenawee Medical Care Facility. He was born August 21, 1927, in Adrian, Michigan, the only son of the late Oren “Moon” and Bessie (Gephart). On September 11, 1950, he married Joan Buehrer at her home, and they have celebrated 67 years together. Anxious to follow in his father’s footsteps, Jack enlisted in the armed forces serving in the Merchant Marines during World War II and also in the Army during the Korean Conflict. He worked delivering milk in Tecumseh, and in maintenance for several companies including American Chain & Cable, Budd Company and GoCorp. Jack was a member of the Jaycees in Tecumseh, and also a distinguished member of the Girl Scouts serving as an advisor in support of his daughters. Jack enjoyed woodworking and carving. He volunteered driving veterans to appointments, and was known as the neighborhood handyman. Jack and Joan enjoyed wintering in Nokomis, Florida for many years. In addition to his wife, Joan, he is survived by their three daughters, Jera (Clifford) Stratton of North Port, FL, Jana (Randy) Porterfield of Evans Lake, and Jodi (Tom) Waldvogel of Erie: two grandchildren, Brad and Kelsey Porterfield; two great grandchildren, Zoe and Emma; a sister, Oneita, and beloved foster child, Sheila. Besides his parents, he was preceded in death by three sisters, Doris, Norma and Jeannette. Funeral services will take place at 2:00 p.m., Sunday, December 10, 2017, at Wagley Funeral Home with Rev. Geoff Koglin officiating and military honors conducted by the American Legion Post #97 and VFW Annis Fint Post #1584. Private burial will be at Franklin Cemetery. Visitation will be held at the funeral home Sunday from noon until the service at 2:00 p.m. Contributions in memory of Jack are suggested to Hospice of Lenawee. Online condolences and memories may be shared at www.WagleyFuneralHomes.com.

The family of John "Jack" Robinson created this Life Tributes page to make it easy to share your memories.

Send flowers to the Robinson family.