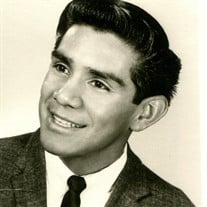 ADRIAN—John V. Martinez, age 73, of Adrian, passed away unexpectedly Thursday, October 18, 2018 at ProMedica Bixby. He was born July 14, 1945, in Riga, MI., to Thomas M. and Louisa (Vega) Martinez. On August 29, 1968, he married Margarita Martinez. She preceded John in death on May 3, 2018. John graduated from Grand Ledge Academy in 1965. He proudly served his country in the Army from 1965 to 1966. He then attended Jackson Community College and received a specialist degree in machine repair. John retired in 2005 from GM, after thirty years of service where he worked in machine repair. He enjoyed meeting his friends, mornings at Morning Fresh Bakery, carpentry, building the family home and gardening. His greatest love was spending time with his family. Survivors include his children, Teresa (Tom) Myers of Northville, Maria Brooks of Adrian and Shelley Jeffries of Toledo; 10 grandchildren, 3 great grandchildren; and siblings, Tom and Sam Martinez. John was preceded in death by his parents, his wife of 50 years, Margarita; siblings, David Rojas, Joe Martinez, Minnie Montecinos, Esther Martinez, Mary Gonzales and Lilly Martinez. Funeral services will take place at 1 p.m., Friday, October 26, 2018 at Wagley Funeral Home with Fr. Michael Butler officiating. Burial will follow at Lenawee Hills Memorial Park with military rites conducted by the Annis-Flint Post #1584 and the American Legion Post #97 of Adrian. Visitation will be held at the funeral home Friday from 11 a.m. until the service. Memories and online condolences may be shared at ¬www.WagleyFuneralHome.

The family of John V Martinez created this Life Tributes page to make it easy to share your memories.

Send flowers to the Martinez family.