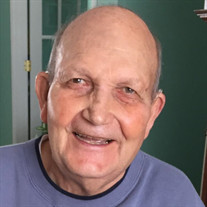 ADRIAN – John “Jack” B. Martin, Jr., age 87 of Adrian, passed away peacefully Thursday, July 18, 2019, at Eden Springs Rehabilitation Center in Green Springs, Ohio. He was born February 21, 1932, in Detroit, MI, the son of the late John and Louise (Hartung) Martin, Sr., and was a graduate of Morenci High School with the Class of 1950. During the Korean Conflict Jack proudly served in the United States Army as a paratrooper in the 82nd Airborne Division. On June 15, 1957, he married Nancy Baker in Gettysburg, PA, and she survives. Jack was a member of St. Joseph Catholic Church where he was involved with the Ushers Club, Knights of Columbus, and counting the offertory. He worked for General Motors at the Fisher Body Plant in Tecumseh, and retired from Power Train in Toledo. Jack could repair almost everything. He enjoyed fixing cars for friends and family, playing cards and bingo and watching his grandchildren play sports. He also enjoyed gardening, country western music, travelling abroad, and visiting family in Pennsylvania and W. Virginia. Jack loved to go hunting with his sons. In addition to Nancy, his wife of over 62 years, he is survived by their sons: Michael (Melissa) of Lambertville, Douglas of Phoenix, AZ, and Stephen (Heather) of Franksville, WI; grandchildren: Brandon, Amanda, Douglas, Shannon, Danielle, Courtney, April, Amber, Elijah, Abigail, and Nicholas; siblings: Sr. Patricia Martin O.P., Rosemary Case, and Martha (Paul) Monahan; and numerous nieces and nephews. He was preceded in death by his parents and siblings: Joseph “Ed” and William Martin, Dolores Figy and Barbara Ferris. The Mass of the Christian Burial will take place at 11 a.m., Tuesday, July 23, 2019, at St. Joseph Catholic Church with Rev. Tim McIntire as celebrant. Burial will follow at Lenawee Hills Memorial Park in Adrian with military honors conducted by VFW Annis Fint Post #1584 and American Legion Post #97. The family will receive friends on Monday, July 22, 2019 from 2 to 4 p.m. and 6 to 8 p.m. with a prayer vigil at 7:30 p.m., at Wagley Funeral Home. In lieu of flowers, donations may be made to the charity of your choice. Online condolences and memories are welcome at www.WagleyFuneralHomes.com.

The family of John "Jack" Martin, Jr. created this Life Tributes page to make it easy to share your memories.

Send flowers to the Martin, family.