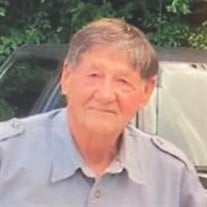 BLISSFIELD –John David “Dave” Jacobs, age 81, of Blissfield died at home on Thursday evening, September 2, 2021 with his family by his side. Born on November 9, 1939 in Detroit, Dave was the only son of Howard and Harriet Jacobs. He grew up with his family in Toledo, Ohio. Dave lived across the street from Our Lady, Queen of the Most Holy Rosary Cathedral, where he was an altar boy. Dave married Barbara Bevington Gess on October 5, 1973 in Lambertville, MI and they have shared 47 wonderful years together. After high school, Dave served his country in the United States Army during the Vietnam War. Dave’s easy going personality was a good fit for sales and he spent many years working for Bearings Incorporated in Toledo. He took it upon himself to be “on-call” for all the local farmers when they needed replacement bearings or bushings during their busy farming seasons. During his retirement years, Dave worked special events for the University of Toledo. He loved hot rods and airplanes of any kind, but especially war planes. In his younger years, Dave belonged to the Sylvania Moose Lodge #1579, the Blissfield Kiwanis Club and the Corvette Club. Later in life, he continued his love of cars by being a member of the Oak Park Gang Car Club. In addition to his wife, Barbara, Dave is survived by their children, Laurie Steele (Mike Steele) of Texas, Mark (Frances) Gess of Wisconsin, John Jacobs, Jr. of Toledo, OH and Keri (Steve)Norris of Milford, MI; 12 grandchildren and 3 great-grandchildren. He was preceded in death by his parents. At Dave’s request cremation will take place. All services will be private with the family at a later date. Memorial contributions may be made to the donor’s choice of charity. Arrangements have been entrusted to Wagley Funeral Home, Tagsold Chapel in Blissfield; where online condolences and memories may be shared at www.WagleyFuneralHomes.com.

The family of John David "Dave" Jacobs created this Life Tributes page to make it easy to share your memories.

Send flowers to the Jacobs family.