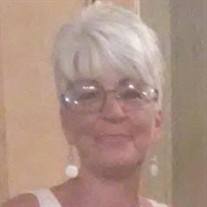 ADRIAN – Jodi Kaye Reynolds, 57, of Adrian died Wednesday, April 28, 2021, at the Hospice of Lenawee Home surrounded by her family. Born February 16, 1964, in Denver, CO, she was the daughter of Wendell and Janet (Emory) Johnson. On September 15, 2001, Jodi married William Reynolds, Jr., and he survives. Jodi loved spending time with and caring for her family, especially her children and her grandchildren. She was an active, faithful member of the Bethel A.M.E. Church in Adrian. She enjoyed reading in her spare time. Jodi will be remembered for how well she took care of so many people. In addition to her mother, Janet Johnson, and Bill, her husband of over 20 years, she is survived by their children, Julie (Nate) Johnson, Devin Reynolds, and Sabrina Reynolds; grandchildren, Gaige, Collin, Nathaniel and Evan Johnson and Armani Reynolds; great grandson Calel; and brothers, Jeff (Anne) Johnson and Jim (Scotty) Johnson. She was preceded in death by her father, Wendell Johnson and her son, Milton Reynolds. Funeral services for Jodi will take place at 11 a.m., Saturday, May 8, 2021, at Wagley Funeral Home, Adrian with Reverends Lynn Jackson, Faith Mugala and Deanne Henagan as well as Jodi’s cousin, Kelly Hannon, officiating. Burial will follow at Lenawee Hills Memorial Park. Visitation will begin at 10 a.m. and continue until the time of the service. The family suggests that memorial contributions to honor Jodi be made to Bethel A.M.E. Church. A live streaming of the service will be accessible from Jodi’s tribute wall on www.WagleyFuneralHomes.com, beginning at the time of the service, where a link to view the recording will be available for 90 days. Online memories and condolences may be shared at www.WagleyFuneralHomes.com.

ADRIAN &#8211; Jodi Kaye Reynolds, 57, of Adrian died Wednesday, April 28, 2021, at the Hospice of Lenawee Home surrounded by her family. Born February 16, 1964, in Denver, CO, she was the daughter of Wendell and Janet (Emory) Johnson. On... View Obituary & Service Information

The family of Jodi Kaye Reynolds created this Life Tributes page to make it easy to share your memories.

Send flowers to the Reynolds family.