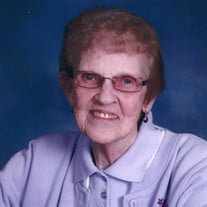 ADRIAN – JoAnne Porter, age 91 of Adrian, passed away Monday, December 4, 2017, at Lenawee Medical Care Facility. She was born May 13, 1926, in Fostoria, Ohio, to Charles “Vern” and Agnes (Lee) Sharp. On August 21, 1944, JoAnne married Edward C. Porter in Blissfield, and they celebrated over 60 years of marriage before he preceded her in death in 2005. JoAnne was an accountant for Bohn Aluminum, where she retired in 1988 with 40 years of service. She was a member of the Adrian First United Methodist as well as the Moose Lodge. JoAnne is survived by her children: Diana (David) Klingler of Tucson, AZ, Janis Sheldon and Steven (Cindy) Porter, both of Adrian, and Jeff (Lisa) Porter of Grand Rapids; 11 grandchildren, Matt, Daniel, Aaron, Rebecca, Todd, Brad, Jennifer, Ryan, Leah, Kellie and Michael; 13 great grandchildren, 4 great great grandchildren, and numerous nieces and nephews. In addition to her husband, she was preceded in death by a great granddaughter and siblings: Treva Chandler, Weldon “Bud” Sharp, Mildred Hoover, Donald, LeRoy, and Robert Sharp. Funeral services will take place at 11:00 a.m., Friday, December 8, 2017 at Wagley Funeral Home with Rev. Drew Hart officiating. Burial will follow at Oakwood Cemetery. Visitation will be held at the funeral home Thursday from 3 to 8 p.m. Contributions in memory of JoAnne are suggested to American Heart Association or First United Methodist Church. Online condolences and memories may be shared at www.WagleyFuneralHomes.com.

The family of JoAnne Porter created this Life Tributes page to make it easy to share your memories.

Send flowers to the Porter family.