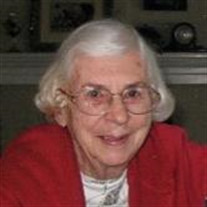 ADRIAN – Joanne L. Boldt, passed away peacefully on May 9, 2017. Her ancestors came from Scotland, England, Germany, and ultimately to Adrian, where Joanne was born February 7, 1926, to Esther M. (Critchell) and Ralph LaVere Carr. She attended Adrian High School and married her high school sweetheart, Harvey Benjamin Boldt. Joanne enjoyed knitting sewing and playing bridge throughout her long life, as well as the companionship of her cat, Maude. She and Harvey raised Sue (Ron) Osgood, of Grand Rapids, MI, Thomas Boldt (Jane Castle) of Adrian, and John (Jeanne) Boldt of Troy, MI. In addition to her children, she is survived by grandchildren, Anna (PJ) Griffis of Spring Hill, TN, Benjamin (Janine) Boldt of Williamsburg, VA, and Kimberley Boldt of Memphis, TN. She is also survived by nieces Jill Scott of Fort Worth, TX and Cynthia (David) Mowrey of Adrian, and a grand-nephew, Scott Mowrey of Farmington, MI. Baptized, confirmed and married in Christ Episcopal Church in Adrian and later a member of West Adrian Congregational Church, Joanne is now reunited with her parents, Harvey, her sister, Elizabeth Scott, her beloved great-aunt, Margaret Larrimer, and other Carr, Gippert and Critchell ancestors who went before her. A gathering of family and friends to celebrate Joanne will be held from 2:00 to 4:00 p.m., Friday, May 12, 2017, at Wagley Funeral Home. In lieu of flowers, the family suggests that donations to the Lenawee Department on Aging would be welcome. Online condolences and memories may be shared at www.WagleyFuneralHomes.com.

ADRIAN &#8211; Joanne L. Boldt, passed away peacefully on May 9, 2017. Her ancestors came from Scotland, England, Germany, and ultimately to Adrian, where Joanne was born February 7, 1926, to Esther M. (Critchell) and Ralph LaVere Carr. She... View Obituary & Service Information

The family of Joanne L. Boldt created this Life Tributes page to make it easy to share your memories.

Send flowers to the Boldt family.