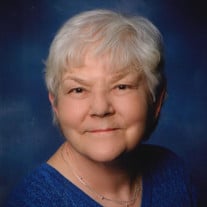 ADRIAN – Joan Anne Larson, 78, of Adrian, departed this life on Saturday, January 9, 2021, at ProMedica Charles and Virginia Hickman Hospital. She was born March 30, 1942, in Brooklyn, New York, the only daughter of the late Joseph and Florence (Side) Basiago. After graduating from high school, she earned a Bachelor’s Degree in Education from the University of Delaware and a Master’s Degree in Early Education from Siena Heights University. On July 22, 1967, she married Arthur Larson in Dover, Delaware, and they have celebrated over 53 years together. Joan retired from the Lenawee Intermediate School District. She was an active, faithful member of St. John’s Lutheran Church. Joan loved to travel and was an avid reader. She thought the world of her grandchildren. Joan always had her iPad ready to show everyone pictures of her grandchildren. In addition to her husband, she is survived by their children, Scot (Sandra) Larson of Petersburg, MI, Joel (Deana) Larson of Roswell, GA; and Tara (Jason) Strickler of Colleyville, TX; four beloved grandchildren, McKenzie, Alaina, Wynston and Eliott; and a brother, Thomas Basiago of AZ. Besides her parents, she was preceded in death by a brother, Robert Basiago. Cremation has taken place and a memorial service will be held on Thursday, January 28, 2021, at 1:00 p.m. at St. John’s Lutheran Church with Pastor Joel Sarrault officiating. The family suggests that memorial contributions in honor of Joan be made to the American Cancer Society. Arrangements have been entrusted to Wagley Funeral Home where online memories and condolences may be shared at www.WagleyFuneralHomes.com.

ADRIAN &#8211; Joan Anne Larson, 78, of Adrian, departed this life on Saturday, January 9, 2021, at ProMedica Charles and Virginia Hickman Hospital. She was born March 30, 1942, in Brooklyn, New York, the only daughter of the late Joseph and... View Obituary & Service Information

The family of Joan Anne Larson created this Life Tributes page to make it easy to share your memories.

Send flowers to the Larson family.