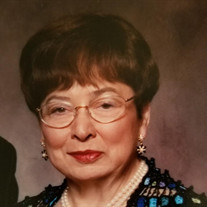 ADRIAN- Joan Eileen Cox, 82 of Adrian, passed away on Sunday, November 18, 2018, at Brookdale Adrian Assisted Living. She was born on June 17, 1936, in Detroit, to E. Stephens and Dorothy (Kratz) Gurdjian. Joan graduated from Cranbrook Kingswood High School in Bloomfield Hills. She went on to attend Albion College where she earned a degree in elementary education. Joan worked as a teacher in Chelsea, St. Clair Shores and Adrian school districts. On August 16, 1958, she married Lawrence K. Cox II, and they celebrated 48 years together before his passing in 2007. Joan enjoyed being active in her community. She was involved with in Tau Delta for 49 years, was President for one year term and received the Alley Kat Award twice. Joan was involved with the Lenawee Country Club and invested her time as a Girl Scout and Cub Scout leader when her children were young. Joan had many interests such as painting, ceramics, flowers of all varieties and her love of fly fishing. Joan had a soft spot for Labradors and had several over the years. Joan is survived by her children, Larry (Janet) Cox of Tabernacle, NJ, Stephen (Heidi) of Stafford, VA, and Laura Brudzinski of Traverse City; her wonderful grandchildren that she adored, Isabel and Zachary Cox and Rachel and Connor Brudzinski; brothers, Richard (Jan) Gurdjian and Edwin (Carol) Gurdjian. In addition to her husband, she was preceded in death by a brother, Ronald Gurdjian. Memorial Celebration of Life will take place on Tuesday, November 27, 2018 at 11:00 a.m. at St. Mary’s Catholic Church with Fr. Tim McIntire, O.P. officiating. Burial will follow at Oakwood Cemetery. Visitation will be from 1 to 4 p.m. on Monday, November 26, 2018, at Wagley Funeral Home, Adrian. Memorial contributions may be made to Hospice of Lenawee. Online condolences and memories may be shared at www.wagleyfuneralhomes.com.

The family of Joan Eileen Cox created this Life Tributes page to make it easy to share your memories.

ADRIAN- Joan Eileen Cox, 82 of Adrian, passed away on Sunday,...