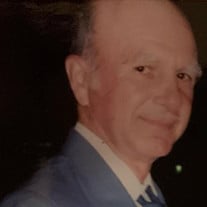 ADRIAN – Jerry Lee Haag, age 78 of Adrian, died Wednesday, April 21, 2021, at the Hospice of Lenawee Home, two days after the death of his wife, Jacklyn. Born December 4, 1942, in Indianapolis, Indiana, he was the son of Kenneth LaVerne and Dorothy Edith (Wampler) Haag. During the Vietnam War, Jerry served in the Army. Jerry and his wife, Jacklyn Maynard, were married July 6, 1963 and shared over 57 years together. Jerry was a lineman for REA for many years. He also had a small business at home repairing and replacing tool handles. He enjoyed fishing, hunting and vegetable gardening. Jerry was a member of the Tipton Community Congregational Church. Jerry is survived by his sister, Marie Haag Cook; and adopted grandchildren, Lucy (Andrew) Pearson, Nicholas (Tonya) Clayton and Sabrina (Michael) Olsson. In addition to his wife, he was preceded in death by his brother, William Haag. Visitation for Jerry and his wife, Jacklyn, will be held Monday, April 26, 2021, from 9 to 11 a.m. at Wagley Funeral Home, Adrian. The funeral service will follow at 11:00 a.m., with Pastor Brad Smith officiating. Military honors will be conducted by VFW Annis-Fint Post #1584 and American Legion Post #97. He will be laid to rest with his wife at Lenawee Hills Memorial Gardens in Tecumseh. Contributions in memory of Jerry are suggested to Tipton Community Congregational Church. Following the Governor’s executive order, all attendees are required to wear a proper face covering, with the exception of those under the age of five years old or those who cannot medically tolerate. A live streaming of the service will be accessible from Jerry’s wife, Jacklyn’s tribute wall on www.WagleyFuneralHomes.com, beginning at the time of the service where a link to view the recording will be available for 90 days. Online memories and condolences may be shared at www.WagleyFuneralHomes.com.

ADRIAN &#8211; Jerry Lee Haag, age 78 of Adrian, died Wednesday, April 21, 2021, at the Hospice of Lenawee Home, two days after the death of his wife, Jacklyn. Born December 4, 1942, in Indianapolis, Indiana, he was the son of Kenneth LaVerne... View Obituary & Service Information

The family of Jerry Lee Haag created this Life Tributes page to make it easy to share your memories.

Send flowers to the Haag family.