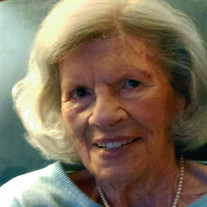 ADRIAN- Jeanne Louise Stevens Benz, 94 of Adrian, passed away on Saturday, March 25, 2017, at the Lenawee Medical Care Facility under the loving care of her family and Hospice of Lenawee. She was born on April 2, 1922, to Harold and Maud (Manor) Stevens, at St. Vincent Hospital in Toledo, Ohio, where her father was an intern. She graduated from Libby High School in 1940, and went on to attend Vanderbilt University where she was a member of the Tri Delta Sorority. Jeanne then transferred to the University of Michigan’s Nursing School and met her husband to be, Carl Benz. They were married on June 11, 1945, in Toledo, Ohio. Jeanne and Carl settled in Adrian, Michigan, in 1948, where they raised three children Steven, William and Maudy Benz. Jeanne loved the Adrian community and enjoyed being a part of it. She has seven grandchildren and eight great grandchildren, all who loved her dearly. Jeanne was blessed with intelligence, common sense and a strong sense of fairness. She and her husband discovered two beautiful places to spend their leisure time, the Florida Keys and Traverse City’s Old Mission Peninsula. She enjoyed bridge, traveling, volunteering, and the University of Michigan’s football and basketball teams. Jeanne also knew a little tap dancing and in her time could hold her own on the dance floor. She was a member of Kapa Kappa Epsilon Sorority and Alpha Omega, both of Adrian. Jeanne was an avid reader as well as the consummate note writer. It wouldn’t be long after she received a gift of kindness that a note, always hand written in her beautiful script, would arrive. In her last few years, Jeanne was provided loving support from her caregivers, who are angels, especially Lisa, Dallas and Jill. Jeanne’s family would like to thank the staff of Green Gables at Lenawee Medical Care and Hospice of Lenawee. Jeanne is survived by her children Steven (Connie) Benz, Bill (Ann) Benz and Maudy Benz. She is also survived by a brother, Hobart Stevens of Grand Rapids, Ohio; grandchildren Matthew (Erika) Benz, Noah (Vanessa) Benz, Jeanne (Santino) Profenna, Emily Benz (David Boxer), Christopher (Esther Alexis) Benz, Daphne Zaborowski and Conrad Zaborowski; and 8 great-grandchildren, Alexandra Benz, Daniel Benz, Samuel Benz, Celia Benz, Leah Profenna, Wren Profenna, Hugo Boxer and Olympia Boxer; and several nieces and nephews. She was preceded in death by her parents and husband of 52 years. A Memorial Service will be held for Jeanne at 11 a.m., Saturday, April 15, 2017, at the First Presbyterian Church of Adrian with Rev. Sarah Ross officiating. Visitation will be Friday, April 14 from 5 to 7 p.m. at Wagley Funeral Home, Adrian and one hour before the service at the church. Memorial contributions in memory of Jeanne may be made to First Presbyterian Church of Adrian or KKE Children’s Library, City of Adrian. Envelopes will be available at the funeral home and the church. Online condolences and memories may be shared at www.WagleyFuneralHome.com

ADRIAN- Jeanne Louise Stevens Benz, 94 of Adrian, passed away on Saturday, March 25, 2017, at the Lenawee Medical Care Facility under the loving care of her family and Hospice of Lenawee. She was born on April 2, 1922, to Harold and Maud (Manor)... View Obituary & Service Information

The family of Jeanne Louise Benz created this Life Tributes page to make it easy to share your memories.

Send flowers to the Benz family.