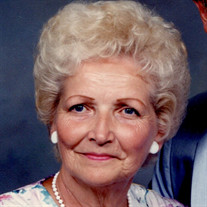 ADRIAN- Jean Lemons, age 89, of Adrian went to be with her Lord and Savior on Wednesday, August 8, 2018. She strongly believed in II Corinthians 5:8 “To be absent from the body is to be present with the Lord.” She was born January 1, 1929, to Ben and Goldia (Powers) Elliott. Jean married her beloved husband Richard Lemons on January 22, 1950. They shared 64 wonderful years together before his death on October 26, 2014. Jean attended Bethany Assembly of God in Adrian for over 50 years. She was an active member faithfully serving in the nursery and toddler classroom for many years and assisting with the funeral dinners where she made her “old fashion bake beans” loved by many. Starting out in the working world Jean was a waitress at the Lenawee Hotel, from there she moved on to Madison Schools and worked in the cafeteria. Jean retired from the Fisher Body Plant in Tecumseh after 23 years and treasured the many lifelong friends she made during this time. Jean was a dedicated gardener in both flowers and vegetables. She spent many long hours canning the vegetables from her garden and these in turn were enjoyed by many. Jean had various pets and was an animal lover. Family was Jean’s first priority and she treasured the time she spent with her grandchildren over the years. She is survived by her children, Greg (Linda) Lemons, Diane (David) Harder and Jim (Laurie) Lemons, five grandchildren and 7 great-grandchildren. Jean was preceded in death by her parents, husband, Richard, 3 siblings and grandson, David. The family would like to extend a special thank you to Great Lakes Hospice and Lenawee Medical Care Facility. Funeral services for Jean will be on Monday, August 13, 2018, at 11 a.m. at Wagley Funeral Home with Sr. Audrey Clay and Linda Brown officiating. Burial will follow at West Madison Cemetery. Visitation will be on Sunday, August 12, 2018, from 2 to 6 p.m. In lieu of flowers, memorial contributions may be made to the Christian Mission in Adrian. Online condolences and memories may be shared at www.wagleyfuneralhomes.com.

ADRIAN- Jean Lemons, age 89, of Adrian went to be with her Lord and Savior on Wednesday, August 8, 2018. She strongly believed in II Corinthians 5:8 &#8220;To be absent from the body is to be present with the Lord.&#8221; She was born January... View Obituary & Service Information

The family of Jean Lemons created this Life Tributes page to make it easy to share your memories.

Send flowers to the Lemons family.