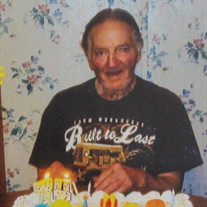 MANITOU BEACH –Jean “John” Laharrague, age 77, of Manitou Beach died Sunday morning, September 5, 2021 at home with his family by his side. John was born on May 10, 1944 to Pierre and Jeanne Marie (Leon) Laharrague; who lived in the French Basque Country of the Pyrenees Region in France. He completed his formal education and served in the French Military for two years. On September 29, 1973 John married his sweetheart, Cheryl Maddux, at St. Mark’s Lutheran Church in Brooklyn, MI. They met at a country club in Southfield, MI and would have celebrated 48 years together later this month. After John was finished with his military service he went to Canada where he worked in the tobacco fields and farmed. He later went to Windsor, Canada where he received training as a millwright journeyman and worked for the Ford Motor Company. He continued to work for Ford at the Dearborn Stamping Plant, retiring after more than 30 years of service. John was very proud of becoming an American citizen. John’s spiritual faith was important to him throughout his life. He was raised Catholic and served as an altar boy in France. Later in life, John was a founding member of the Lutheran Church of the Lakes in Addison, MI and was very involved while his young family was growing up. John had many interests related to farming and nature. He took a special interest in raising sheep and understood what it meant to make hay while the sun was shining. Any day was a good day when John could be out on his Ford tractor. In addition to his loving wife, Cheryl, John is survived by his children, Cheri Renee Laharrague(Chris) Hall and Dustin Jean Laharrague; grandchildren, Noah Christopher Hall, Hunter Jean Hall and Audrianna Elizabeth Laharrague; brother, Emile Laharrague and sister-in-law, Cheri Lynn Maddux(Chuck Moffitt). He was preceded in death by his parents and brothers, Joseph and Robert Laharrague. At John’s request, cremation will take place and there will be no formal services. Memorial contributions may be made to the Michigan Parkinson Foundation. Arrangements have been entrusted to Wagley Funeral Home, Adrian, where online condolences and memories may be shared at www.WagleyFuneralHomes.com.

The family of Jean "John" Laharrague created this Life Tributes page to make it easy to share your memories.

Send flowers to the Laharrague family.