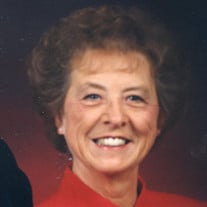 BLISSFIELD – Janet L. Sell, age 85 of Blissfield, passed away Saturday, June 8, 2019, at her home under the loving care of her family. She was born March 9, 1934, in Kenton, Ohio, the oldest child of John and Naomi (Fink) Benner, and graduated from Burnham High School in Sylvania. On August 23, 1952 Janet married John Sell, Jr. and they celebrated over 63 years together. John preceded her in death in 2016. Janet was a secretary for General Telephone Company of Ohio for many years, retiring in 1986. She was a member of St. Paul’s Lutheran Church, and belonged to several other organizations including American Business and Professional Women, Samaria Order of the Easter Star, Zenobia Dendarah Court, Sylvania Moose, Red Hat Society and the Extension Club. She was past president of the women’s groups at Faith Lutheran Church. Janet and John farmed together, enjoyed traveling, and treasured spending time with family and friends at their cabin in Harrison and their winter home in Florida. She is survived by her daughter, Deborah (Tom) O’Reilly of Temperance; grandchildren, Cindy (Christopher) Stamper and Steven (Kari) Schwamm; great grandchildren, Cameron, Cora, Hailey and Carter; and many nieces and nephews. In addition to her parents and husband, she was preceded in death by a daughter, Sherri Lynn in infancy and siblings, Jack Benner, Joan Hudik and Shirley Allen. Funeral services will take place at 11 a.m., Wednesday, June 12, 2019, at St. Paul’s Lutheran Church with Rev. Gary Leking officiating. Burial will follow at Ogden Township Cemetery. Visitation will be held at Wagley Funeral Home, Tagsold Chapel in Blissfield on Tuesday from 4 to 8 p.m. and again Wednesday at the church from 10 a.m. until the service. Contributions in memory of Janet are suggested to St. Paul’s Lutheran Church. Online condolences and memories may be shared at www.WagleyFuneralHomes.com.

BLISSFIELD &#8211; Janet L. Sell, age 85 of Blissfield, passed away Saturday, June 8, 2019, at her home under the loving care of her family. She was born March 9, 1934, in Kenton, Ohio, the oldest child of John and Naomi (Fink) Benner, and graduated... View Obituary & Service Information

The family of Janet L. Sell created this Life Tributes page to make it easy to share your memories.

Send flowers to the Sell family.