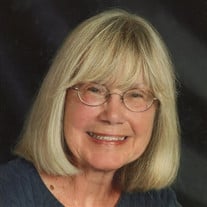 ADRIAN- Did you ever wonder what Jacob’s ladder looked like? At least for my dear wife, Janet, it was like a spiral conical stairway small in diameter as you entered and opening wider as you climbed. It was like fluffy white clouds going up to a golden hue with sparking blue sky. I was able to go part way with her. It took several days and yes, there were angels along the way. Janet made it on, Thursday, February 6, 2020, after an eight-year journey with Alzheimer’s. She walked with this illness with her steely determination and her dignity intact. Janet proved that Alzheimer’s has no authority over the love of God revealed in Christ Jesus her Lord. Janet was born in Chicago on Oct 23, 1941. She was the fourth child from the union of Edward and Clara (Benschop) Nelson. While in college, she married Harold Lowry and together they had Kimberly Hanley and Matthew (Samantha) Lowry. Janet has three grandchildren, Sophia, Justin and Scarlett, who love and miss her dearly. Family was such an important part of Janet’s life. One of Janet’s proudest moments was finishing her college degree (while working) the year her son graduated from college. Over the years, she worked in management for private companies and state and local government. Janet’s faith was an integral part of her life and she lived by example. She was involved with teaching at various churches over the years and led many service projects. In her mid-forties, she met and married James Caldwell. Janet treasured the time she shared with Jim’s sons, Michael, Andrew, Robert and Jon. Jim and Janet were blest to experience the love which God intended when He made Adam and Eve, and which is the closest thing to paradise on this earth. Alzheimer’s never took away Janet telling Jim, “I love you.” Janet’s legacy left behind is those whom she loved and cared for and inspired by her life. She is survived by her husband, Jim; children, Kimberly and Matthew; grandchildren and stepsons; brothers, Charles (Jean), Thomas (Marla) and Donald (Gwen) Nelson. Janet was preceded in death by her parents, and siblings, Joyce and Eddie. She was assisted through this journey with two special means. Christy Tiede, of Home Instead Senior Care, assisted at home for nearly two years with faithful and loving care. Daybreak of Adrian, under the leadership of Tammy Jewell, provided day care in a manner that brings tears. Thank you. Hospice of Lenawee stepped in and carried us through to the end. Also, the family would like to thank the many friends from church, the community and the pastoral care of Rev. Drew Hart. At Janet’s request, cremation will take place. A memorial service will be held at the First United Methodist Church in Adrian on Monday, February 10, 2020, at 11 a.m. with Rev. Drew Hart officiating. Visitation will be held on Sunday, February 9, 2020, from 4 to 7 p.m. at Wagley Funeral Home. Memorial contributions may be made to Daybreak or Hospice of Lenawee. Online memories and condolences may be shared at www.WagleyFuneralHome.com

ADRIAN- Did you ever wonder what Jacob&#8217;s ladder looked like? At least for my dear wife, Janet, it was like a spiral conical stairway small in diameter as you entered and opening wider as you climbed. It was like fluffy white clouds going... View Obituary & Service Information

The family of Janet Claire Lowry created this Life Tributes page to make it easy to share your memories.

ADRIAN- Did you ever wonder what Jacob’s ladder looked like?...

Send flowers to the Lowry family.