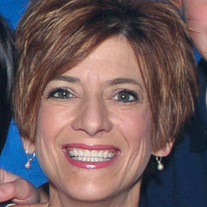 ADRIAN, MICHIGAN – Jana W. Van Buren, age 53 of Adrian, Michigan, passed away Saturday, May 6, 2017, at St. Joseph Mercy Hospital in Ann Arbor, Michigan, after struggling for years with common variable immune deficiency. Born March 10, 1964, in Mobile, Alabama, she was the oldest daughter of Paul and Jane (Odom) Williamson. She was a member of the graduating class of 1982 at Parkview High School in Lilburn, Georgia, and attended Reinhardt College. On July 19, 2003, Jana married Jerald “Jay” Van Buren, Jr. in Blissfield, Michigan, and he survives. Jana met her future husband while working for an insurance broker in Georgia. After Jay persuaded her to move to Adrian, Michigan, Jana’s southern charm and outgoing personality made it easy for her to quickly find a wonderful group of friends. She loved her work in the home healthcare industry for Senior Helpers, and more recently for Right at Home where she was their outreach coordinator. After losing a grandmother to Alzheimer’s, Jana worked passionately to raise funds for research. She served as Past Chairman for the Lenawee County Walk to End Alzheimer’s. She was also a member of KKE Sorority. Jana’s favorite pastimes were the culinary arts, flower arranging and gardening. Jana treasured her family and will be greatly missed by those surviving including her parents, Paul and Jane Williamson of Louisville, Kentucky, husband, Jay; their children, Josh and Jewel; a sister, Paula (Chip) Evans of Louisville, Kentucky; her in-laws, Dr. Jerald and Janet Van Buren, Sr. of Adrian, Michigan, Jeff (Beth) Van Buren and Jodie (Mark Gilbert) Paster, both of Blissfield, Michigan; and her nieces and nephews, Mallory, Grace, Avery, Jack, Emma, Jacob, and Jenna. Jana was preceded in death by her grandparents, Grady and Gladys Jewel Williamson, Sr. and Oscar and Minnie Odom, Sr. A Celebration of Life service will be held at 2 p.m., Thursday, May 11, 2017, at Element Church, Adrian, Michigan, with her brother-in-law, Pastor Chip Evans and Pastor Gayle Ruble, Jr. officiating. Burial will be private at Oakwood Cemetery. Friends may visit the family Wednesday from 3:00 to 8:00 p.m. at Wagley Funeral Home. Contributions in Jana’s memory are suggested to the Alzheimer’s Association. Online condolences and memories are welcome at www.WagleyFuneralHome.com.

The family of Jana W. Van Buren created this Life Tributes page to make it easy to share your memories.