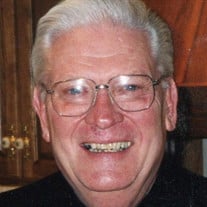 ADRIAN – James E. Toncre, age 86 of Adrian, passed away Monday, February 6, 2017 at Charlotte Stephenson Manor. He was born February 24, 1930, in Cleveland, Ohio to the late Raymond and Eleanor (Granger) Toncre. After graduating from Willoughby Union High School, he went on to earn a Bachelor of Science Degree from Kent State University. He also graduated from Stonier Graduate School of Banking at Rutgers University and Commercial Lending School at Oklahoma University. On December 20, 1952, he married Ilo Worcester, and they have shared 64 years together. Jim’s career in the financial sector began when he served in the Finance Corps of the United States Army from 1952-1954. After working for Shell Oil Company, he went into banking working as Vice President at Lake County National Bank. As President and CEO he worked at Michigan Bank Mid-South, and most recently, Adrian State Bank, now Huntington Bank. In 1995 he established The Toncre Agency where he was President until his retirement in 2016. Jim was Master Counselor of Order of DeMolay 1946 Willoughby Chapter, a charter member of the Mentor, Ohio Lodge of Free and Accepted Masons, and a member of Ancient Accepted Scottish Rite 32nd Degree Mason for over 50 years. He was honored with the DeMolay Legion of Honor Award. Jim was named as one of the Outstanding Young Men of America in 1965, and in 2000 he was inducted into the Willoughby-Eastlake Distinguished Alumni Hall of Fame. Jim was instrumental in the founding of the city of Mentor, Ohio which was accomplished by joining the Village of Mentor and Mentor Township. In 1972, he authored “Industrial Development in a Rapidly Growing Community”. Jim was committed to the communities in which he lived, serving on the Board of Education in Mentor, Ohio, on the Advisory Board of Adrian College, and as President and Director of the Chamber of Commerce in Mentor, Ohio, as well as Adrian, Michigan. He also served as Director and President of the Board of Hospice of Lenawee and was an Adrian Symphony Orchestra board member for over 20 years. Jim was a member of the First United Methodist Church. In addition to his wife, Ilo, he is survived by his sons, Scott Toncre of Adrian and Craig (Kelly) Toncre of Maumee, OH; grandchildren, Kari and Eric; and a brother Emery Toncre of New Jersey. Funeral services will take place at 11:00 a.m., Saturday, February 11, 2017, at Adrian First United Methodist Church with Rev. Christopher Brundage officiating. Burial will take place at Mentor Cemetery in Mentor, Ohio, Monday, February 13, 2017 at 1:00 p.m. Visitation will be held at Wagley Funeral Home on Friday from 4:00 to 7:00 p.m. In lieu of flowers, contributions in memory of Jim are suggested to Adrian Symphony Orchestra or Hospice of Lenawee. Online condolences and memories may be shared at www.WagleyFuneralHomes.com.

The family of James E. Toncre created this Life Tributes page to make it easy to share your memories.

Send flowers to the Toncre family.