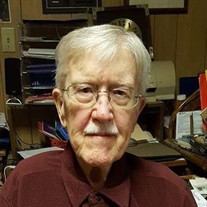 BLISSFIELD—James Alva Tipton, age 88, of Blissfield, died Sunday, January 19, 2020, at Ebeid Hospice in Sylvania. He was born May 4, 1931, in Blissfield, the only child of the late Maurice and Vera (Wotring) Tipton. He was married to Helen M Carr, and together they had three children, Roxann, Terrence and Susan. After his marriage to Mildred “Millie” Carl on June 26, 1969, his family grew with three more children, Kyle, Amy and Carrie. Jim and Millie were blessed with 42 years together until her death on December 15, 2018. While farming his entire life, Jim also worked at RCA/GE Electronics Repair in Toledo. He was also a realtor for Close Realty and did tax preparation. Jim served as the union steward for IBEW Local 1076, as Blissfield Township Supervisor, as a board member for Lenawee County Department of Human Services, as a planning commissioner for Lenawee County, and as president of the board of University of Toledo Federal Credit Union. He was a member of the Sons of Union Veterans of the Civil War and a proud member of the MENSA Society. He traveled extensively throughout the United States and abroad, and enjoyed flying his plane. Jim was a faithful member of the Blissfield Emmanuel United Methodist Church. Surviving are six children, Roxann (Rev. Michael) Ingersoll of Colorado, Terrence (Vicki) Tipton of Blissfield, Rev. Susan (Larry “Duke”) Woodall of Rootstown, OH, Kyle (Mary Ann) Doyle of Swanton, Amy (Bill) Renwand and Carrie Wood, both of Blissfield; 12 grandchildren; 20 great grandchildren and 4 great-great grandchildren. He was preceded in death by his parents and wives. Funeral services will take place Saturday, January 25, 2020, at 10:00 a.m. at the Blissfield Emmanuel United Methodist Church with Pastor Devin Smith officiating. Burial will follow in Pleasant View Cemetery. Visitation will be held Friday, from 4 to 8 p.m. at Wagley Funeral Home, Tagsold Chapel in Blissfield. Contributions in Jim’s memory are suggested to be given to Emmanuel United Methodist Church. Online condolences and memories may be shared at www.WagleyFuneralHomes.com.

BLISSFIELD&#8212;James Alva Tipton, age 88, of Blissfield, died Sunday, January 19, 2020, at Ebeid Hospice in Sylvania. He was born May 4, 1931, in Blissfield, the only child of the late Maurice and Vera (Wotring) Tipton. He was married to Helen... View Obituary & Service Information

The family of James A. Tipton created this Life Tributes page to make it easy to share your memories.

Send flowers to the Tipton family.