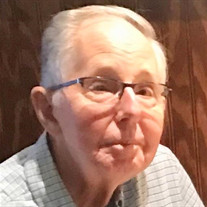 James H. Keinath, 84, of Fayetteville, GA passed away peacefully on July 12, 2019, where he was surrounded by loved ones in his daughter’s home. Jim was born to Richard and Alvina Keinath on December 5, 1934 in Deerfield, MI. They preceded him in death. Jim married Luella Knierim on April 23, 1960. She preceded him in death on March 16, 1969 after fighting a battle with leukemia. He then married Alice Nichols on June 4, 1971 with whom he spent most of his life. She preceded him in death on September 1, 2011. Jim leaves behind three children, Michael Keinath and Julie Pearce, both of Fayetteville, GA and Lisa Nichols of Detroit, MI. He is also survived by eight grandchildren. Megan, Cody and Nicklaus Pearce of Fayetteville, GA, Danielle (Leo) Coleman of Dundee, MI, Katrina (Chris) Kimberly, Dustin Keinath, and Brianna Keinath, all of Monroe, MI and Sarah (Chuko) Mendoza of Vero Beach, FL. In addition to his children and grandchildren, he leaves behind 13 great-grandchildren. He is also survived by one brother, Thomas (Pat) Keinath of Deerfield, MI, and two sisters, Marjorie (William) Brown of Palo Cedro, CA and Susan (Edward) LaSelle of Boulder City, NV. He graduated from Deerfield High School in 1954, served in the US Army and worked at General Motors until he retired in 1991. He also served on the Deerfield Board of Education, Deerfield Co-Op Board of Directors. He was an active member of his church where he served on the church council and shared many laughs with members of the congregation while playing Dart Ball. He especially enjoyed spending time with his grandchildren and great-grandchildren. He took them on many vacations and enjoyed giving them rides on his tractors or teaching them to drive his four wheeler, pickup or whatever else that moved. He would also take them to the Deerfield Co-op, where he would show them off and order a half a cup of coffee and a donut. He looked forward to helping at the Deerfield Testicle Festival every year, playing Eucre at the Deerfield Legion every week and snowmobiling with his friends up north whenever he could. Jim was a kind, caring, loving man who will be greatly missed by his family and friends. Funeral services for James will be 11 am, Friday, July 19 at Immanuel Lutheran Church, Blissfield with Rev. Gary Leking officiating. Burial will follow at Deerfield Cemetery. Military honors will be presented by the Deerfield American Legion Post 329. Visitation will be 3 to 5 pm and 6 to 8 pm on Thursday, July 18 at Wagley Funeral Home, Tagsold Chapel. There will also be a visitation on Friday at the church from 10 am until the time of the service. Online condolences and memories may be shared at www.WagleyFuneralHomes.com.

James H. Keinath, 84, of Fayetteville, GA passed away peacefully on July 12, 2019, where he was surrounded by loved ones in his daughter&#8217;s home. Jim was born to Richard and Alvina Keinath on December 5, 1934 in Deerfield, MI. They preceded... View Obituary & Service Information

The family of James Keinath created this Life Tributes page to make it easy to share your memories.

Send flowers to the Keinath family.