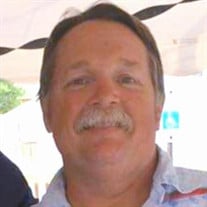 ADRIAN –James “Jim” Dale Gough, age 59, of Adrian, died peacefully on Sunday, May 2, 2021. He was born on August 4, 1961 in Saulte St. Marie, the son of Dale and Rose (Kaunisto) Gough. Jim’s father died before he was born and he was blessed to have been raised by his mother and stepfather, Phil Healy. Jim was influenced by Phil’s time in the Navy and after his high school graduation, he joined the United States Navy, serving his country from 1980 to 1984. On January 23, 1988, Jim married Cecilia “Ceal” Schirrick in Dearborn, MI and they have shared 33 years together. Jim worked as a master electrician. He was a member of the First Presbyterian Church in Adrian, where he was very active as a deacon, cooked the men’s breakfast and was the “go to man” for fixing things around the church. When his children were younger, Jim volunteered his time cooking in the 4-H kitchen during the week of the Lenawee County Fair. He enjoyed deer hunting, riding motorcycles, and was a member of the American Legion Post #97. Jim loved the time he was able to spend with his family and grandchildren, creating special memories. In addition to his wife, Ceal, Jim is survived by their children, Dale Gough (Stephanie Gawne), Carol (Daniel) Condron, Doug Schirrick (Anna Meredith) and Ivan Gough; grandchildren, Andrianna Sivrais and Eli Terrero; brothers, Pat and Philip Healy; nephew, Matt Hammerschmidt and his four-legged companion, Cadbury. He was preceded in death by his parents and brother, Tom Gough. Visitation will take place on Sunday, May 9, 2021, from 2 to 4 p.m. at the First Presbyterian Church in Adrian. Funeral services will follow at 4 p.m. with Rev. Ann Marie Montgomery officiating. Full military rites will be conducted by the Annis-Flint Post #1584 and the American Legion Post #97. Following the Governor’s executive order, all attendees are required to wear a proper face covering, with the exception of those under the age of five years old or those who cannot medically tolerate. In lieu of flowers, memorial contributions may be made to the First Presbyterian Church, Adrian. Arrangements have been entrusted to Wagley Funeral Home, Adrian, where online memories and condolences may be shared at www.WagleyFuneralHomes.com.

The family of James "Jim" Dale Gough created this Life Tributes page to make it easy to share your memories.

Send flowers to the Gough family.