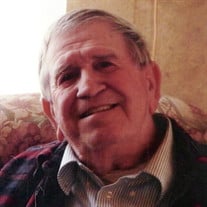 HILLSDALE—James D. Covell of Hillsdale, Michigan passed away Saturday Dec. 9, 2017 at his home under the loving care of his family. He was born 1936 in Tecumseh, Michigan to Ruth (Peotter) and Clement Covell. Jim attended Tecumseh Schools, graduating in 1956. He served two years in the Army in Panama. In 1970, he married Joan Smith and she proceded him in death in 1986. In 1990, Jim married Phyllis Honeycutt Chase and she survives him. Jim was employed for over forty six years at the Tecumseh Products, retiring in 2003. Jim is survived by his wife, Phyllis, two sons, Charles Covell of Tecumseh and Scott Chase (Nicole) of Hillsdale; his daughter, Debra Sue (Robert) Swick of Hillsdale; grandchildren, Sasha and Sabrina Covell, Joshua Amos Swick, Michael (Beckie DuShane) McKitterick, Derek, James (Samantha Garcia) and Lauren (Darley Lawson) Chase; two great grandchildren, Lincoln and Brantley Lawson. Jim was one of eleven children, all preceding him with the exception of two sisters, Joyce Dauber of Whitmore Lake and Janie Stokes of FL; two sisters in law, Georgianna Covell and Rose Covell, both of Tecumseh; and brother in law, Gary (Shirley) Honeycutt. Also surviving Jim, is his constant companion, Mari, the little bundle of fur that adored him. Visitation for Jim will be Tuesday, December 12, 2017 from 5 to 7 pm at Wagley Funeral Home, Adrian. A graveside service will be on Wednesday, December 13, at 1 pm at Hunt Cemetery, Gorman Road, Adrian with Rev. Bruce Jewett officiating. Online condolences and memories may be shared with the family at www.WagleyFuneralHome.com.

HILLSDALE&#8212;James D. Covell of Hillsdale, Michigan passed away Saturday Dec. 9, 2017 at his home under the loving care of his family. He was born 1936 in Tecumseh, Michigan to Ruth (Peotter) and Clement Covell. Jim attended Tecumseh Schools,... View Obituary & Service Information

The family of James D Covell created this Life Tributes page to make it easy to share your memories.

Send flowers to the Covell family.