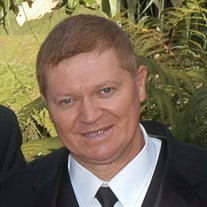 Jaime Salomon Tobar went home to be with his Lord and Savior on July 9, 2020 in Adrian, Michigan. He was surrounded by his loving wife of 40 years Alicia, his three children and his brother in law whom he loved as his own son. He was 69 years old and created many lasting memories. He lived a life for God and others. Jaime Salomon Tobar served in various phases of education for over 45 years in Ecuador and the United States. For 15 years he taught at Alliance Academy in Quito, Ecuador. He served as President of the Southern Baptist Youth Association of Ecuador for several years. He also served as a pastor in Ecuador for many years. In 1990, he immigrated to Adrian, Michigan where he taught at Lenawee Christian School, then was Associate Professor at Central Michigan University, and ended his career at Ann Arbor Pioneer High School, where he retired from in 2018 after 24 dedicated years. During this time he was also an adjunct professor at Siena Heights University and Adrian College. Jaime Salomon was a joyful and dynamic leader, that loved his wife, children and family. He was an exceptional father, and you would rarely see him without his children, even in adulthood. Beside spending time with his family, Jaime’s favorite pastime was traveling, and had visited over 45 countries. Jaime was an absolute soccer fanatic. He also loved cheering on his Michigan Wolverines. He was a lover of the arts and would frequent musicals, plays, dance recitals, and concerts. We all have a history, but not everyone will leave a legacy. A legacy is simply a history that is worth repeating. The outpouring of love from the many people whose lives he touched is a testament to his enduring legacy. He will be sorely missed, but his memory and example will never be forgotten. In May of 2019, Jaime Salomon suffered an aneurysm and persevered through several treatments, rehabilitation, and trials for the past 14 months. Jaime did not pass away, he passed over into the presence of God where he is hearing the words of His Heavenly Father, "Well done good and faithful servant. You have been faithful with a few things; I will put you in charge of many things: enter into the joy of your Lord. Jaime Salomon was preceded in death by his parents, Carlos and Anita Tobar, and his brother Jose “Pepe” Tobar. He is survived by his wife, Alicia Tobar. Their three children Jonathan (Irena) Tobar, Ana Sofia (Ryan) Oshnock, and Gabriela Tobar. Three dear siblings, Ligia (Eliecer) Ordoñez, Marco (Violeta) Tobar, and Carlos (Rachel)Tobar. Jaime “abuelo” will be missed by his grandchildren, Viviana, Gabriela, Santiago, and Phillip. Also, many nieces and nephews of the extended family of the Tobar and Tamayo families. Visitation will be held on Tuesday, July 14 from 3:00-5:00pm followed by a Celebration of Life service at 5:00pm at Wagley Funeral Home, in Adrian, MI, with Pastor Jeff Barbieri officiating. Following the Governor’s executive orders, all individuals entering the funeral home are required to wear a mask with the exception of those under the age of five years old or those who cannot medically tolerate. Guidelines for social distancing will also be followed. In lieu of flowers or gifts, the Tobar family requests that donations be given in Jaime’s memory to Hospice of Lenawee. Online memories and condolences may be shared at www.WagleyFuneralHomes.com

Jaime Salomon Tobar went home to be with his Lord and Savior on July 9, 2020 in Adrian, Michigan. He was surrounded by his loving wife of 40 years Alicia, his three children and his brother in law whom he loved as his own son. He was 69 years... View Obituary & Service Information

The family of Jaime Salomon Tobar created this Life Tributes page to make it easy to share your memories.

Jaime Salomon Tobar went home to be with his Lord and Savior...

Send flowers to the Tobar family.