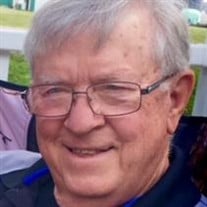 HUDSON – Jack L. Quigley, age 79 of Hudson, passed away peacefully Friday, September 14, 2018 at University of Michigan Hospital. He was born October 29, 1938, in Adrian, Michigan to Leon and Mary (Barnes) Quigley. Jack was a 1958 graduate of Adrian High School as well as a graduate of Michigan State University Police Academy. He also attended Siena Heights University. Jack proudly served his country in the United States Navy from 1960-1965 aboard the USS Shangri-La in the Mediterranean and the Caribbean. He married Choyce Ann Strayer on August 16, 1969 and was blessed with 49 years with the “love of his life”. Their marriage was filled with love, compatibility and a strong faith. Jack’s career with the Adrian Police Department spanned over 32 years and included him coaching the Jr. Adrian Police Department Explorers shooting team to first place in the national pistol competition at Camp Perry. He was an accomplished competitive pistol shooter who attained the status of being a finalist in the Pan-American Games, the World Games and the Olympic Games. For many years he competed at the National Pistol Shooting Matches at Camp Perry, Ohio, and was a member of the prestigious President’s 100. Jack was a well-known firearms instructor at the Washtenaw Police Academy. He taught many CCW/CPL classes and took pride in helping students learn about gun safety. For many years he served as a trustee of Medina Township. He also served on the Region II Planning Commission and was a member of MTA. After Jack and Choyce retired from their careers in Adrian, they opened a Log Home Bed and Breakfast on the family farm near Hudson. They enjoyed welcoming guests from all over the world. Jack was a faithful member of the Morenci Church of the Nazarene. It was very important to him to share with others about his faith in Christ. He was a good friend to many and will be missed. He loved spending time with his family. In addition to his wife, Choyce, he is survived by their children: Jacqueline (Eddie) Cansler of Hartford City, IN, Shelley (Mark) LeRoy of Towns End, DE, Cathy Hoberty of Westfield, IN, and Patrick (Billi Jo) Quigley of Hudson, MI; grandchildren: Zachary (Allison) Rennaker, Justin (Lauren) Rennaker, Colt (Lindsey) Cansler, Russell (Tina) Saltzman, Jeffrey (Constance) Quigley, Anthony (Pentera) West, Amanda (Jesse) Beal, Bethany (Carl) Borsotti, Noah Shelly, MacKenzie Quigley and Connor Quigley; great grandchildren: Addison Rennaker, Emerson Cansler , Cameron, Meghan and Ashlyn Saltzman, and Kaliyah, Amayah and Shea Quigley with three more great grandchildren on the way. He is also survived by a brother, Dale (Linda) Quigley of Raleigh, NC and a sister, Denise (Gary) Flanders of Big Bear City, CA. Besides his parents, he was preceded in death by a son, Russell Quigley. Funeral services will take place at 1 p.m., Wednesday, September 19, 2018, at Adrian First Church of the Nazarene with Rev. Dusty Pauken and Rev. Larry Betz officiating. Burial will follow at Oak Grove Cemetery in Morenci with military honors conducted by VFW Annis Fint Post #1584 and American Legion Post #97. Visitation will be held at Wagley Funeral Home, Adrian on Tuesday from 3 to 5 p.m. and 6 to 8 p.m. and again Wednesday at the church from noon until 1 p.m. In lieu of flowers, contributions in memory of Jack are suggested to the Children’s Leukemia Foundation of Michigan, 27240 Haggerty Rd., Ste. E-15, Farmington Hills, MI 48331, Attn: Kelly Conen. Online condolences and memories may be shared at www.WagleyFuneralHomes.com.

The family of Jack L. Quigley created this Life Tributes page to make it easy to share your memories.

Send flowers to the Quigley family.