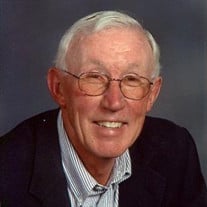 ADRIAN – Jack C. Patterson, treasured husband, brother, father, grandfather and friend, passed away Saturday, April 8, 2017 at the Hospice of Lenawee Home. He was 80 years old. Born July 8, 1936, in Adrian, Michigan, Jack was the son of Charles and Phyllis (Edwards) Patterson. He graduated from Britton High School, and completed his education at the Agricultural Technology School at Michigan State University. On December 11, 1954, he married his high school sweetheart, Char Cadmus and she survives, having celebrated over 62 years together. He began working at Cutler Dickerson in 1956, purchased into the business in 1968, and continued working in the day to day operations until it was sold in 2014. Jack truly appreciated the agricultural community and was a strong supporter of 4-H and past president of FFA. He was also a member of Rotary and Jaycees, as well as serving on several boards including Adrian State Bank for 38 years with 11 years as Chairman, Bixby Hospital, where he was the Vice Chair for 7 years, Lenawee Community Foundation, Britton/Deerfield Foundation, Adrian Hospital Authority Board and the Agricultural Museum Board. He remained active with the Agricultural Technology School alumni, and was recognized as their Distinguished Alumni in 1972. Jack was a great University of Michigan fan. He enjoyed summers at Round Lake and time up north at Lake of the Pines. He was a member of the Adrian First United Methodist Church. In addition to his wife Char, he is survived by their sons, Ric (Jeanne) Patterson of Adrian and Jeff (Mary Lou) Patterson of Tecumseh; a brother Larry (Julie) Patterson of Sturgis, MI; four grandchildren: Erica, Zachary (Stephanie), Megan and Max; and three great grandchildren, Jack, Ella and Ben; and special foster child, Amelia. He was preceded in death by his parents. The family would like to extend a sincere thank you to all the caregivers from Bixby Promedica, University of Michigan Health Systems and Hospice of Lenawee for their exceptional care. A memorial Celebration of Life will take place at 1:00 p.m., Wednesday, April 12, 2017 at Wagley Funeral Home with Rev. Drew Hart and Rev. Larry Betz officiating. Private burial will be at Ridgeway Cemetery. Visitation will be held at the funeral home Tuesday from 2 to 4 p.m. and 6 to 8 p.m. In lieu of flowers, contributions in memory of Jack are suggested to Hospice of Lenawee or the Adrian First United Methodist Church. Online condolences and memories may be shared at www.WagleyFuneralHomes.com.

The family of Jack C. Patterson created this Life Tributes page to make it easy to share your memories.

Send flowers to the Patterson family.