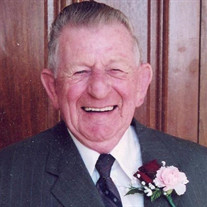 ADRIAN – Jack R. Dillon, Sr., age 87 of Adrian, passed away Monday, January 30, 2017, at University of Michigan Hospital. He was born October 19, 1929, in Adrian to Benjamin and Helen (Kelsey) Dillon. He married Louise Tate on March 15, 1958, and she preceded him in death in 2002, having been blessed with 43 years together. He was additionally blessed with five children: Ruthann (Larry) Corbin, Jack (Wanda) Dillon, Jr., Matt (Jamie) Dillon, Dawn (Jamie) Pearson, and Rhonda (Teresa) Dillon. Jack was a member of the Medina Federated Church. He worked for Kewaunee Scientific for 35 years, and later for Precast Concrete. For over 20 years, he volunteered with REACT, serving as president for many of those years. Jack enjoyed woodworking, his CB Radio, keeping a beautiful yard, and in his younger years, bowling and playing baseball. On February 21, 2004, Jack married Ann Sanford Hansen, in Nashville, TN, and she survives. In addition to his children and wife, Ann, he is survived by her children, Kathy (Doug) Gillin and Barbara Hansen; 14 grandchildren, 27 great grandchildren, 3 great great grandchildren, sisters-in-law, Lois Dillon and Betty Dillon as well as numerous nieces and nephews. Besides his parents and wife, Louise, he was preceded in death by 3 brothers and 3 sisters. Funeral services will take place at 11 a.m., Thursday, February 2, 2017 at Wagley Funeral Home in Adrian with Pastor Darren Lemmon officiating. Burial will follow at Oakwood Cemetery. Visitation will be held at the funeral home Wednesday from 2 to 4 p.m. and 6 to 8 p.m. Contributions in memory of Jack are suggested to Medina Federated Church. Online condolences and memories may be shared at www.WagleyFuneralHomes.com.

The family of Jack R. Dillon Sr. created this Life Tributes page to make it easy to share your memories.

Send flowers to the Dillon family.