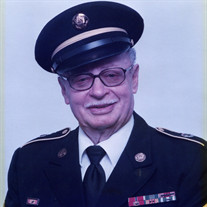 ADRIAN – Ira C. Cooper, age 87, of Adrian, formerly of Blissfield, passed away Saturday, March 24, 2018, at the Hospice of Lenawee Home. He was born October 5, 1930, in Petersburg, MI, the only son of George and Grace (Uebele) Cooper. On April 20, 1964, he married Alwine Kisser, in Germany, and she survives. Ira served in the United States Navy for 2 years, and the United States Army for 20 years. He was stationed in Germany, the Philippine Islands, Korea and Vietnam. Ira’s last years were spent as a recruiter in Detroit, Monroe County and Lenawee County. He retired from the military as a Sergeant First Class in 1973. Ira also drove truck for WA Trucking, L & M Trucking and Jones Transfer. He was a member of the Blissfield American Legion and the Adrian Moose Lodge. In addition to Alwine, his wife of almost 54 years, he is survived by their children: Kurt Cooper of Adrian, Michael (Sue) Cooper of Maybe, MI, and Tina (Marty) Nine of Blissfield; his sister, Bernice Baker of Monroe, MI; grandchildren: Jessica (Allen) Hall, Brittney Cooper, Kayla (Jake) Graf, Jarred Cooper, Courtney (Cole) Kimerer, and Katie Nine; and great grandchildren: Olivia, Avery, Cooper, Ryan and Quincy. He was preceded in death by his parents. Thank you to Hospice of Lenawee for the excellent care and comfort they provided for Ira and his family. Funeral services will take place at 3 p.m., Wednesday, March 28, 2018 at Wagley Funeral Home, Adrian, with Rev. Larry Betz officiating and military honors conducted by VFW Annis Fint Post #1584 and American Legion Post #97. Visitation will be held Wednesday from 1 p.m. until the service. Online condolences and memories may be shared at www.WagleyFuneralHomes.com.

The family of Ira C. Cooper created this Life Tributes page to make it easy to share your memories.

Send flowers to the Cooper family.