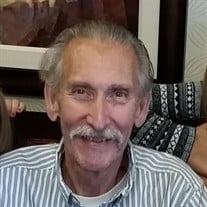 TECUMSEH – Hugo Hamil Umphrey, 79, of Tecumseh, passed away early the morning of Monday, July 30, 2018 at Cambrian Memory Care in Tecumseh, under the care of Great Lakes Hospice. Born, September 19, 1938 in Decatur, AL, he was the son of the late Hugo Chambley and Ila Mae (Holland) Umphrey. He was a 1957 graduate of Highland Park High School. He proudly enlisted in the Army immediately following high school and was trained at Fort Benning, GA as a part of a signal battalion. He was also stationed in Germany during peace time. In 1964, he began his employment with General Motors as an assembly line worker and eventually applied and was accepted into the apprentice program for skilled trades as a Tinsmith. While working full time and raising his family, he earned his Associate’s degree from Henry Ford Community College. On July 1, 2004 after 40 years of service, he retired from the General Motors Plant in Romulus, MI. Hugo enjoyed gardening, fishing, spending time with his family, and had a true love of the outdoors. He was a member of the Church of Christ in Tecumseh. Hugo was a lifelong student of the Bible. He enjoyed listening to and following famous preachers. Hugo was especially fond of the Rev. Billy Graham and Dr. David Jeremiah, just to name a few. He is survived by his three children, Julie (Umphrey) Gorman, Derrick Umphrey, and Nathan Umphrey, six grandchildren, Amy Rochowaik, Melanie Rochowiak, Zach Rochowiak, Lauren Umphrey, Joshua Umphrey, and Nicole Umphrey; and one great-grandchild, Myles Williams. In addition to his parents, he was preceded in death by his brother, Eugene James Umphrey of St. Joseph, Missouri in 2015. Local visitation for Hugo will be on Wednesday, August 1, 2018 at Wagley Funeral Home, Adrian from 4-8 p.m. Funeral Services will be held on Saturday, August 4, 2018 at 11:00 a.m. at Hebron Church of Christ in Joppa, AL. Visitation in Alabama will be held at the Cullman Funeral Home in Cullman, AL on Friday, August 3, 2018 from 6-8 p.m. Hugo will be laid to rest with his family in the Hebron Church of Christ Cemetery in Joppa, AL. The family suggests that donations be made to the Alzheimer’s Association or Shults-Lewis Child & Family Services . Online condolences and memories may be shared with the family at www.wagleyfuneralhomes.com.

TECUMSEH &#8211; Hugo Hamil Umphrey, 79, of Tecumseh, passed away early the morning of Monday, July 30, 2018 at Cambrian Memory Care in Tecumseh, under the care of Great Lakes Hospice. Born, September 19, 1938 in Decatur, AL, he was the son... View Obituary & Service Information

The family of Hugo Hamil Umphrey created this Life Tributes page to make it easy to share your memories.

Send flowers to the Umphrey family.