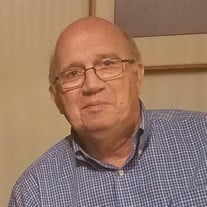 ADRIAN-Howard P. Cox, 74, of Adrian died Tuesday afternoon, May 3, 2022 at St. Joseph Mercy Hospital in Ann Arbor surrounded by his loving family. Born on October 2, 1947 in Cleveland, Ohio, Howard was the only son of Lawrence P. and Ruth L. (Green) Cox. The family moved to Adrian when Howard was a toddler and he graduated from Adrian High School with the Class of 1965. On January 4, 1969, Howard married Carol Cramer at Raisin Valley Friends Church with his father, Rev. Lawrence Cox officiating the ceremony. Always interested in flying, Howard obtained his pilot’s license as a teenager and continued to fly until his passing. Howard started his career at Anderson Development Company in 1970 as a company pilot before transitioning to sales. He continued to grow with the company and went on to become the Director of Urethane Products, retiring in 2016 after 46 years of dedicated service. He was an active member of Raisin Valley Church for most of his life. Howard was an amateur radio operator and enjoyed attending the EAA AirVenture Show in Oshkosh, Wisconsin for over thirty years. Howard and Carol belonged to the Devil’s Lake Yacht Club where they enjoyed taking their boat out with family and friends. In addition to his wife, Carol, of 53 years, Howard is survived by their sons, Michael Cox and Mark (Jennifer) Cox both of Michigan and Matthew (Rachel) Cox of Colorado; grandchildren, Jenna and Timothy Cox and many wonderful friends. He was preceded in death by his parents. Funeral services will be held on Saturday, May 7, 2022 at 2:00 p.m. at Wagley Funeral Home in Adrian, with Pastor Chris Cramer officiating. Burial will follow at Raisin Valley Cemetery. Visitation will take place on Friday, May 6, 2022 from 6 to 8 p.m. at the funeral home and again at 1 p.m. until the start of the service on Saturday. Memorial contributions may be made to Raisin Valley Friends Church or Orchard Grove Community Church in Walled Lake, MI. Online condolences and memories may be shared at www.WagleyFuneralHomes.com.

ADRIAN-Howard P. Cox, 74, of Adrian died Tuesday afternoon, May 3, 2022 at St. Joseph Mercy Hospital in Ann Arbor surrounded by his loving family. Born on October 2, 1947 in Cleveland, Ohio, Howard was the only son of Lawrence P. and Ruth L.... View Obituary & Service Information

The family of Howard P. Cox created this Life Tributes page to make it easy to share your memories.