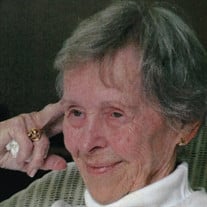 ADRIAN – Hope Tappe Weatherby, age 94 of Adrian, Michigan, passed away in the early morning hours of February 16, 2018, at Brookdale of Adrian, where she had lived for four years. She died peacefully with family by her side. She was born June 10, 1923, in Toledo, Ohio, to Leonard and Marjorie (Stevens) Tappe. Hope lived in Ann Arbor and graduated from Ann Arbor High School in 1941. She was training for the 1940 Olympic swim team; however, those Olympic Games were cancelled due to events leading up to WWII and the bombing of Pearl Harbor. Hope turned her focus to an accelerated war-year’s program in engineering. She studied at the University of Michigan in 1941-1942 and the University of Minneapolis in 1943, and completed certification in the “Cadet Program of Engineering.” During WWII, Hope worked for the aeronautical firm Curtis Wright and helped design the power plant of the “Helldiver,” a carrier-based dive bomber produced for the Navy. On September 22, 1945, she married Robert Weatherby, and he preceded her in death on August 25, 2007, having shared over 62 years together. After the War, Hope moved to Middletown, Ohio, and continued her engineering occupation as co-owner of the family’s mechanical engineering firm, Weatherby and Associates. Hope and Robert lived in Middletown, Ohio, for 30 years and then retired to Longboat Key, Florida, in 1978. Hope lived in Longboat Key until moving, in 2014, to the Brookdale Assisted Living Facility. She was a talented classical pianist, enjoyed golfing and knitting, and was an avid bird watcher. She had many fond memories of spending the summers in the Upper Peninsula in the family cottage, where there was no electricity or running water. She is survived by her children, Craig (Nancy) Weatherby of Adrian, Dian Weatherby (Mike Hanlon) of Virginia, and Lynn Weatherby of Wisconsin; grandchildren, Peter Averdick, Krissy Miller, Joel Finkelman and Janis Finkelman; and great-grandchildren, Phoebe and Benjamin Averdick and Anthony and Brody Miller. In addition to her parents and husband, she was preceded in death by a brother, Bruce Tappe. Per Hope’s request, cremation has taken place and a memorial celebration will be held at the family retreat in Epoufette, Michigan, later this summer. Arrangements have been entrusted to Wagley Funeral Home, where online condolences and memories may be shared at www.WagleyFuneralHome.com. To celebrate Hope’s enduring love of nature, the family asks that memorial contributions be directed to the River Raisin Watershed Council at www.riverraisin.org.

ADRIAN &#8211; Hope Tappe Weatherby, age 94 of Adrian, Michigan, passed away in the early morning hours of February 16, 2018, at Brookdale of Adrian, where she had lived for four years. She died peacefully with family by her side. She was born... View Obituary & Service Information

The family of Hope Tappe Weatherby created this Life Tributes page to make it easy to share your memories.

Send flowers to the Weatherby family.