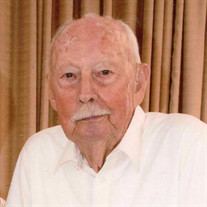 ADRIAN – Homer Leon Dangler, 94, died Saturday morning, December 7, 2019, at his home surrounded by his family while under the loving care of Hospice of Lenawee. He was born November 12, 1925, in Deshler, Ohio to Homer Elmer and Ethel Pearl (Thatcher) Dangler. Homer attended Leipsic Public Schools. He enlisted and proudly served his country in the Navy during World War II, where he was stationed in Brazil. Homer had an extensive knowledge of American History and was very active in organizations and clubs that shared his pioneering spirit. A skilled craftsman and exquisite woodcarver, Homer completed many projects over the course of his career and lifetime. A self-taught and enthusiastic musician, he recently built a handmade violin that sounded as beautiful as it looked. Homer’s first love was flying, which began as a child, building model airplanes. His interest in flying increased during his time in the Navy. He built and flew three airplanes. Over the years, he formed lasting friendships with many “flying buddies.” On January 9, 1949, Homer married Frances Arlene Pfister, and she survives. Together, they travelled all over the United States and Canada and wintered in Florida. Homer enjoyed fishing, boating, bocce ball, and shuffle board, where he was sometimes termed, the “Shuffle-Meister.” Homer was an active member of the West Adrian Community Church and a lifelong member of the Leipsic American Legion Post #287. In addition to his loving wife of over 70 years, Frances, he is survived by his children, Dianna (Norman) Samuelson, Tim (Brenda) Dangler, and Peggy Dangler; 6 grandchildren; and 12 great-grandchildren. Homer was preceded in death by his parents, and 3 sisters. A memorial service for Homer will be held on Saturday, December 14, 2019 at 11:00 a.m. at the West Adrian Community Church, 4545 Wolf Creek Highway, Adrian, MI with Pastor Geoff Koglin, officiating. Military honors will be conducted by VFW Annis Fint Post 1584 and American Legion Post 97.Visitation for Homer will take place on Friday from 2-4 and 6-8 p.m. at Wagley Funeral Home, Adrian, and again on Saturday at the church from 10:00 a.m. until the time of the service. Interment will be private and take place at a later date in Sugar Ridge Cemetery in Leipsic, OH. Memorial donations to honor Homer can be made to the Hospice of Lenawee, West Adrian Community Church, or the Salvation Army. Online condolences and memories may be shared at www.WagleyFuneralHomes.com.

ADRIAN &#8211; Homer Leon Dangler, 94, died Saturday morning, December 7, 2019, at his home surrounded by his family while under the loving care of Hospice of Lenawee. He was born November 12, 1925, in Deshler, Ohio to Homer Elmer and Ethel... View Obituary & Service Information

The family of Homer Leon Dangler created this Life Tributes page to make it easy to share your memories.

Send flowers to the Dangler family.