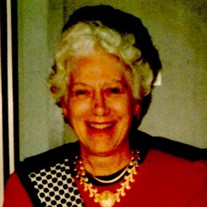 ADRIAN- Hildreth Houston Spencer died Monday, July 30, 2018, at home. She was born in Adrian, Michigan, on January 8, 1927, the only child of James Houston Spencer and Cornelia Miller Spencer. She leaves no survivors. After graduating from Adrian High School in June 1944, Hildreth attended Ohio Wesleyan University and received her B.A. degree in 1948. She received her M.A. degree in History in 1949 from the University of Michigan, in Ann Arbor. Years later she earned her Ph.D in History from Northwestern University in Evanston, Illinois. Dr. Spencer taught for two years at a private school in Wisconsin, Milwaukee-Downer Seminary. In 1952 she became a member of the History Department at Highland Park High School. She remained in the Chicago North Shore suburb for 32 years as a teacher and administrator. In 1956 she pioneered her district’s participation in the Advanced Placement program for Modern European History. This program was-is under the auspices of the College Board in New York. Hildreth was selected by the Educational Testing Service in Princeton, New Jersey to serve on a five person board to write both the essay section and multiple choice questions on the A.P. test for Modern European History as well as a portion of the S.A.T. As part of her Sabbatical year in 1981 she worked for both her school and the College Board as a liaison with the Advance Placement program and the International Baccalaureate in Europe. In 1984, Hildreth was honored to be one of the speakers at a National Convention for the National Endowment for the Humanities in Phoenix, AZ where she presented a paper, and led a seminar. She was a member of Christ Episcopal Church in Adrian, Phi Beta Kappa National Scholastic honorary and various professional organizations. She also was a member of The Daughters of the American Revolution, The Lenawee Country Club, The Sarasota Yacht Club, and an Adrian group known as Alpha Omega. She had served on the Boards of the Lenawee Humane Society, The Adrian Symphony Orchestra, The Family Awareness Center, and The Sarasota Opera Association in Florida, where she spent many winters. In 2009, Adrian College recognized her as an Honorary Alumna. At the Adrian College Commencement ceremonies in 2012, Hildreth received an honorary Doctorate in Humane Letters. Her passions were her love for animals, books, classical music and world travel from 1950 until 2001, when travel abroad turned burdensome. Although she had no family for several years, Hildreth was blessed with having had many dear friends throughout her long and happy life. As Hildreth leaves no survivors, there will be no visitation. Funeral services will be held in Herrick Chapel on the Adrian College campus on Tuesday, August 7, 2018, at 11:00 a.m., with the former 16th President of Adrian College, Dr. Stanley Caine officiating. A luncheon will be served following the service. Burial will take place following the luncheon at the family plot in Oakwood Cemetery. Arrangements have been entrusted to Wagley Funeral Home, Adrian, Michigan. Memorial contributions may be sent to the Lenawee Humane Society or the James Houston Spencer and Cornelia Spencer Memorial Music Scholarship at Adrian College. Online condolences and memories may be shared at www.wagleyfuneralhomes.com.

ADRIAN- Hildreth Houston Spencer died Monday, July 30, 2018, at home. She was born in Adrian, Michigan, on January 8, 1927, the only child of James Houston Spencer and Cornelia Miller Spencer. She leaves no survivors. After graduating from... View Obituary & Service Information

The family of Hildreth Houston Spencer created this Life Tributes page to make it easy to share your memories.

Send flowers to the Spencer family.