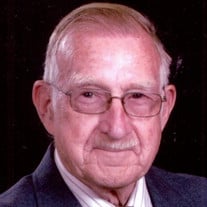 ADRIAN – Herbert W. Hamann, age 93 of Adrian, passed away Friday, March 1, 2019, at Provincial House. He was born February 21, 1926, in Blissfield to William and Marguerite (Burkhart) Hamann, and graduated from Adrian High School in 1944. During World War II, he proudly served in the United States Army. On March 8, 1947, he married Joyce Shadbolt in Angola, Indiana. She preceded him in death in 2001. Herb was a tool and die maker for several local companies for 40 years, retiring from American Chain and Cable. He worked part time for Ray’s Floor Covering and Phil Kingsley Floor Covering until he was 85 years old. Herb also built three homes. He enjoyed family camping, 4-wheeling up north, and being a fan at his grandchildren’s sporting events and extra-curricular activities. Surviving are his daughters, Vicki VanNorman and Jacalyn (Philip) Kingsley, both of Adrian and Julie (Eric) Penrod of Kankakee, IL; 10 grandchildren, 14 great grandchildren and 2 great great grandchildren. He was preceded in death by Joyce, his wife of 54 years; a brother, Karl Hamann; and a sister, Gladys Howard. Funeral services will take place at 10 a.m., Wednesday, March 6, 2019, at Wagley Funeral Home with Rev. Paul Herter officiating and military honors conducted by VFW Annis Fint Post #1584 and American Legion Post #97. Burial will follow at Lenawee Hills Memorial Gardens in Tecumseh. Visitation will be held at the funeral home Tuesday from 4 to 8 p.m. Contributions in memory of Herb may be made to Hospice of Lenawee. Online condolences and memories may be shared at www.WagleyFuneralHomes.com.

The family of Herbert W. Hamann created this Life Tributes page to make it easy to share your memories.

Send flowers to the Hamann family.