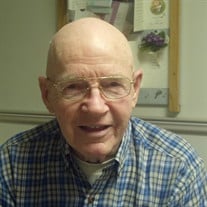 ADRIAN- Herbert “Ed” Summers, 92, of Adrian, died Friday, November 15, 2019, at Brookdale of Adrian. Born August 23, 1927, in Adrian, he was the son of the late Sanford and Edith (Baker) Summers. He married Ruth Pate on June 7, 1953, at Sand Creek Community Church, and she preceded him in death on December 14, 2014. Ed graduated from Onsted High School with the Class of 1945. He proudly served his country as a member of the United States Navy for a year during WWII, and again later from 1951 until his honorable discharge in 1955. He spent his working career of 34 years driving truck for Merillat Industries. Herbert and Ruth were members of the Adrian First Christian Church for over 30 years, and later became faithful members of Ogden Church. Herbert devoted his life to his family, and is fondly remembered as a consummate family man who always put the needs of others before his own. Surviving to mourn his loss are his two sons, Steven (Rebecca) Summers of Jasper, TN and Mark (Laura) Summers of Minnetrista, MN; siblings, Thelma (Fayette) Miller of Adrian, Dale (Elaine) Summers of Avon, IN, Gale (Sharon) Summers of Phoenix, AZ, and Kathleen (Gary) Vaughn of Glendale Heights, IL; eight grandchildren, Benjamin, Callie, Matthew, Ian, Geoffrey, Gregory, Joseph, and Thomas; three great-grandchildren, Sloane, Gemma, and Katherine; and numerous nieces and nephews. In addition to his parents and his wife, Ruth, Ed was preceded in death by siblings, John, Ilene Francour, Barbara Johnston, Eugene, Donald, Gerald, and LeVaughn. The family will receive friends on Sunday, November 17, 2019, from 1-5 p.m. at Wagley Funeral Home in Adrian. A funeral service will take place on Monday, November 18, at 11:00 a.m. at the funeral home with Pastor Brandon Rickard officiating. Family interment will take place at a date to be determined in the spring of 2020 at Hunt Cemetery. Memorial donations to honor Herbert can be made to Hospice of Lenawee. Online condolences and memories may be shared at www.WagleyFuneralHomes.com.

The family of Herbert "Ed" Summers created this Life Tributes page to make it easy to share your memories.