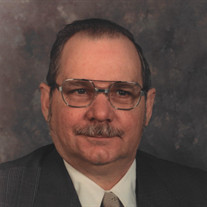 KANSAS – Henry E. McKean, age 91, formerly of Adrian, passed away Saturday, April 13, 2019, at Greenwood Terrace in Olathe, Kansas. He was born December 21, 1927, in Haslett, Michigan to Stanley and Addie (Dell) McKean. During World War II, he served in the United States Navy. On August 5, 1948, Henry married Mary Brown in Adrian, and they were blessed with over 53 years together. Mary preceded him in death in 2002. Henry retired from American Chain & Cable. He also worked at Madison School District for several years. While living in Michigan, he was an active member of the First Church of the Nazarene. In 2002, Henry moved to Kansas to be near his daughter, and joined the First Southern Baptist Church in Overland Park. Henry is survived by his daughter, Margaret “Maggie” Johnson and her husband, Dan of Overland Park, Kansas; a sister, Cheryl Franklin of Forsyth, Missouri; and numerous grandchildren including great and great great grandchildren. In addition to his parents and wife, he was preceded in death by sons, David McKean and James Smith; and brothers, Stanley, Edward and Carroll McKean. The family will gather at Wagley Funeral Home in Adrian at 11 a.m., Monday, April 22, 2019, then proceed to Lenawee Hills Memorial Park for burial with Rev. Larry Betz officiating.

The family of Henry E. McKean created this Life Tributes page to make it easy to share your memories.

Send flowers to the McKean family.