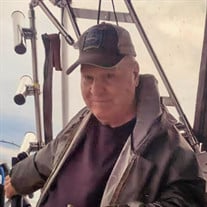 ADDISON- Harvey Lee Maddox, 78, of Addison died on Wednesday, May 4, 2022. He was born on November 7, 1943 in Delrose, Tennessee to Lloyd Gene and Florence Geneva (McClure) Maddox. Harvey was one of six children in the Maddox family where family ties ran deep and you learned about a strong work ethic at a very early age. He attended school in Elkton and Boones Hill, Tennessee. Harvey relocated with his father and brothers to Michigan where the job opportunities in the automotive field were plentiful. Harvey worked at Lenawee Tire for several years and was set to start at Ford Motor Company in Saline when he was drafted into the United States Army. He served overseas in Vietnam from 1966-68, and upon his return to Michigan started at Ford, as they had reserved his position for him. He worked in heavy equipment maintenance and retired from Ford after 35 plus years of service. On April 12, 1971 Harvey married Gloria Gunter at St. Mary’s Catholic Church in Adrian, and they celebrated 37 wonderful years together before her death on September 27, 2008. Together they raised a family and instilled in their children the responsibility of chores. Their children all remember being summoned out to the vegetable garden to help weed and tend to the produce. Harvey enjoyed hunting, fishing, and of course, spending time in his vegetable and flower gardens. He loved sharing his produce with friends and neighbors. Harvey had several Ford tractors that he loved to work on and keep them in running condition. Harvey is survived by his children, Karen (Ben) Perez, Kevin (Katie) Maddox, Monica (Garnett) Hegeman and Angie Maddox; grandchildren, Jonathan Perez (Julia Scoby), Rachael (Jordan) Kelly, Kaden Maddox, Chance Maddox, Jillian Maddox and Alexander Maddox; great-grandchildren, Benjamin Perez and Colson Kelly; siblings, Bobby and Tommy Maddox, Sandra Dillon and Beverly Harper; and several special grand dogs. He was preceded in death by his parents; wife, Gloria and sister, Doris Binkley. Funeral services will be held on Tuesday, May 10, 2022 at 1 p.m. at Wagley Funeral Home, in Adrian, with Rev. Larry Betz officiating. Burial will follow at St. Mary’s Catholic Cemetery with military honors being conducted by the Annis-Flint Post #1584 and the American Legion Post #97 of Adrian. Visitation will take place on Monday, May 9, 2022 from 4 to 7 p.m. at the funeral home and on Tuesday from 11 a.m. until the start of the service. In lieu of flowers, memorial contributions may be made to the donor’s choice. In remembering Harvey, his family encourages random acts of kindness to be shared with others. Online condolences and memories may be shared at www.WagleyFuneralHomes.com.

ADDISON- Harvey Lee Maddox, 78, of Addison died on Wednesday, May 4, 2022. He was born on November 7, 1943 in Delrose, Tennessee to Lloyd Gene and Florence Geneva (McClure) Maddox. Harvey was one of six children in the Maddox family where... View Obituary & Service Information

The family of Harvey Lee Maddox created this Life Tributes page to make it easy to share your memories.

Send flowers to the Maddox family.