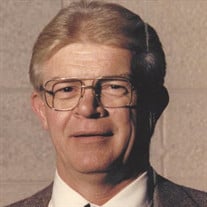 Surrounded by his devoted family, Brent went home to the loving arms of our Lord on Monday, October 9, 2017. A resident of Adrian, MI, he was born in Detroit June 29, 1939 to Ralph Britton and Mary Gay Bachman. Raised in Dearborn, he entered the US Air Force in 1957 after graduating from Edsel Ford High School. Following basic training in Texas, Brent was stationed at Hickam AFB in Oahu, Hawai’i with the 1502 Flight Line Maintenance Squadron. His three years there, coinciding with Hawai’i’s statehood in 1959, gave him an abiding love for the Hawai’ian culture and ignited his passion for military planes. A heartfelt patriot, he was proud of his service, the US flag, the USAF, and his fellow veterans. After being honorably discharged in 1961, he arrived home to marry Annette Gervais, the “pretty, dark-haired girl” he’d met in 1957 just months before he shipped out. From a three-year courtship conducted mostly by letter, their love story grew and deepened over nearly 56 years of marriage as they worked and raised four children. After two years at the Bank of Dearborn, Brent joined the Dearborn Heights Police Department in 1963 as a patrolman. He worked in road patrol, identification, records and property, and communications, rising through the ranks to retire as uniform sergeant in 1987. He received several departmental citations throughout his career. In 2004, Brent and Annette moved from Dearborn Heights to Adrian, Michigan, near his family roots. They joined Emmanuel Lutheran Church on Ridge Highway in Britton, which his great-grandfather helped found in 1861, and where Brent reconnected with his faith. Retirement allowed him to devote more time to one of the keystone causes of his life – genealogical research. For 50 years he explored the Bachman and Britton families, corresponding with people all over the world, reuniting two branches of the Bachmann family after 300 years, participating in an international DNA project, and documenting an incredible amount of historical information on Dearborn and Lenawee County. He contributed several articles to the Dearborn Historical Museum publication and donated materials to the museum. He truly loved uncovering family stories, and has left us a vast, amazing legacy in words, photos, and documents. A quiet man with a wonderfully sly sense of humor, Brent was an inveterate student, always curious, fascinated by archaeology, astronomy, and so much more. The mainstays that really shaped his life were 50s music, particularly doo-wop, cars, and hockey. From his first 1947 Mercury Coupe, Brent was a car fanatic, and his favorite car was the Mustang. He owned several (all candy apple red) but it was his multiple award-winning 1999 Mustang GT “Stangri-la” that was his pride and joy. Through attending area cruises and car shows, he and Annette gained another circle of friends. Hockey was in Brent’s blood from childhood, on and off the ice. An avid Detroit Red Wings fan all his life, he skated at Olympia Stadium on the same ice as his hero, Gordie Howe, and other Red Wings greats. He was in the building when the Wings won the 1955 Stanley Cup. When Brent’s playing days ended, he became actively involved in local junior hockey organizations, including the Great Lakes JHL (Paddock Pool Saints) and North American JHL (Compuware), in roles from to scorekeeping and statistician to general manager to director of players. In 1987, he became equipment manager for the University of Michigan-Dearborn Wolves and built the position into a valuable asset to the organization, but the hockey program was dropped in 1991. The crowning moment in Brent’s hockey life came as General Manager of the Gold medal-winning North Hockey Team at the 1987 U.S. Olympic Festival in North Carolina. Six of ‘his boys’ went on to the NHL, and Brent always closely followed their careers. Of all his passions and enthusiasms, family was Brent’s greatest love, and his greatest gift to us. Remaining to celebrate his life and legacy are his loving, steadfast and beloved wife Annette; the adoring daughters he called his “four jewels,” Carrie (Tom) Riedeman; Rebecca (Brice) Cobb; Julie Schildt (Glen Neel); Catherine ‘Kate’ (Joe) DePoole; his treasured grandchildren Allison and Joseph Bachman DePoole, and Claire and Emily Schildt; his brother Randall (Cyndi) Bachman, niece Amy (Matt) Hansen, nephew Jason (Melissa) Bachman and their families, along with extended family and friends all over the world. To the end, Brent kept a fighting spirit, and had rallied through numerous health issues, with Annette fighting right at his side and caring for him through every challenge. He is at peace, with his beloved dogs Dax and Chammy, and all the ancestors he introduced us to. For everything, Dad – thank you. Love is eternal. A memorial service will be held Saturday, November 18, 2017 at 11:00 am at Emmanuel Lutheran Church, 9950 Ridge Hwy, Britton, MI 49229, (517) 451-8148, followed by a luncheon. Please email [email protected] for additional information. In lieu of flowers, please honor Brent with a donation to any of the following: National Kidney Foundation; Humane Society of Lenawee County; Hospice of Lenawee; or a worthy veterans, genealogical, or hockey related organization of your choice.

Surrounded by his devoted family, Brent went home to the loving arms of our Lord on Monday, October 9, 2017. A resident of Adrian, MI, he was born in Detroit June 29, 1939 to Ralph Britton and Mary Gay Bachman. Raised in Dearborn, he entered... View Obituary & Service Information

The family of Harold "Brent" Bachman created this Life Tributes page to make it easy to share your memories.

Surrounded by his devoted family, Brent went home to the loving...

Send flowers to the Bachman family.