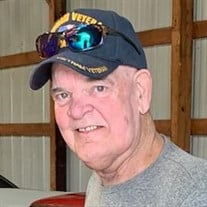 TECUMSEH – Gregory W. King, age 72 of Tecumseh, passed away Wednesday, July 31, 2019, at his home. He was born August 13, 1946, in Petoskey, MI, to the late Robert and Ella Mary (Pratt) King Jr., and graduated from Tecumseh High School with the Class of 1964. Greg enlisted in the United States Navy and proudly served his country during the Vietnam War. Greg worked in telecommunications in several locations including Ohio, New York, Saudi Arabia, and Illinois. When he retired, he moved back to the area to care for his mother. He was a life member of the American Legion Underwood-Orr Post 34 as well as the VFW Hall-Slater Post 4187. He was also a member of the Fraternal Order of Eagles. Greg enjoyed fishing, hunting, and fulfilled his need for speed with his red Camaro. He is survived by his siblings, Bruce (Nancy) King of Manitou Beach, Catherine (Paul) Randall of Brooklyn, and Jeffrey (Ada) King of New Berlin, NY; nieces Elizabeth (Kyle Hooker) Randall and Sarah (Ted) Roberts; great nieces Korynn, Harper and Riley and great nephews Bowyn and Logan. He was preceded in death by his parents. Memorial graveside services including military honors conducted by the Tecumseh VFW and American Legion Posts will take place at noon, Saturday, August 10, 2019, at Oakwood Cemetery followed by a gathering at the American Legion Underwood-Orr Post 34 in Tecumseh. Those wishing to make a memorial contribution in his memory may direct their gifts to the veteran’s organization of their choice. Arrangements have been entrusted to Wagley Funeral Home where online condolences and memories may be shared at www.WagleyFuneralHomes.com.

The family of Gregory W. King created this Life Tributes page to make it easy to share your memories.

Send flowers to the King family.