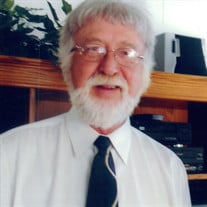 ADRIAN - Graham A. Teague, age 74 of Adrian, passed away Tuesday, May 9, 2017. He was born June 13, 1942, in Forest City, Iowa, the oldest child of Myron and Betty (Graham) Teague. After receiving his Bachelor’s Degree from the University of Iowa, he went on to earn a Juris Doctorate Degree from the University of Toledo Law School. On December 23, 1989, Graham married Jean “Jeannie” Marks Jones, and she survives. In addition to his law practice, Graham also worked for the Friend of The Court. At the courthouse, he was known for wearing unique ties that always made people smile. Graham also spent a great deal of time at Drager Middle School coaching swimming, track, and basketball. He was a member of the American Legion, VFW, AMVETS, and the Eagles. Graham enjoyed playing golf, hunting, and spending time in Florida. In addition to his wife, Jean, he is survived by their children: Joseph Teague, Jeffrey (Susan) Teague, their mother, Sharon Teague, Shannon (Les) Jones Scane and Shane (Heidi) Jones; siblings, Patrick (Mary) Teague of S. Carolina and Cindy (Ken) Hoover of Arizona; and his grandchildren: Joseph Teague, Connor, Jaime, and Leslie Scane and Riley Jones. Besides his parents, he was preceded in death by a grandson, Graham Teague. Memorial services will take place at 11:00 a.m., Tuesday, May 16, 2017, at Wagley Funeral Home with Daniel Schwartz officiating. The family will receive friends at the funeral home Monday from 4:00 to 8:00 p.m. Contributions in memory of Graham are suggested to St. Jude’s Children’s Hospital. Online condolences and memories may be shared at www.WagleyFuneralHome.com.

ADRIAN - Graham A. Teague, age 74 of Adrian, passed away Tuesday, May 9, 2017. He was born June 13, 1942, in Forest City, Iowa, the oldest child of Myron and Betty (Graham) Teague. After receiving his Bachelor&#8217;s Degree from the University... View Obituary & Service Information

The family of Graham A. Teague created this Life Tributes page to make it easy to share your memories.

Send flowers to the Teague family.