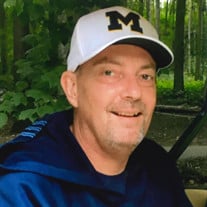 ADRIAN – Gordon (“Gordy”) D. Hartman, 54, of Adrian, died Monday, October 25, 2021, at ProMedica Hickman Hospital. He was born October 15, 1967, in Jackson, Michigan, the son of David and Gordene (Palmer) Hartman. After graduation from Onsted High School in 1985, he joined the United States Army and served in the first Gulf War. Upon completing his tour of duty, he joined the National Guard. On September 9, 1999, he married JoDee Morley, and she survives. Gordy was currently working for Ford Motor Company at the Dearborn Plant. Although he was known for his strong work ethic, Gordy also knew how to play hard. He enjoyed playing softball, golf, and bowling as well as spending as much time with his family as possible. In addition to his mother, Gordene Southwell of Tecumseh, and JoDee, his wife of over 22 years, he is survived by his children, Karlee Jo Hartman and Kendall Gordon Hartman; siblings, DaDene Burke, Corky (Lori) Anderson, Loreta Jo Hartman, and Lonny (Cheryl) Hartman; and numerous nieces and nephews. He was preceded in death by his father, David Hartman; a brother, Lester, in infancy; and his stepfather, Chester Southwell. Memorial services for Gordy will take place at 1:00 p.m., Saturday, November 6, 2021, at Wagley Funeral Home, Adrian with Rev. Larry Betz officiating, and full military honors conducted by the VFW Annis-Fint Post #1584 and the American Legion Post #97. Visitation will be held Saturday from 11:00 a.m. until the time of the service. The family requests that those attending Gordy’s service, to further honor him, please dress “properly” by wearing their favorite University of Michigan or any of the Detroit teams’ attire. The family suggests that memorial contributions to honor Gordy be made to the National Kidney Foundation, the American Legion, or the charity of one’s choice. Online memories and condolences may be shared at www.WagleyFuneralHomes.com.

The family of Gordon D. Hartman created this Life Tributes page to make it easy to share your memories.

Send flowers to the Hartman family.