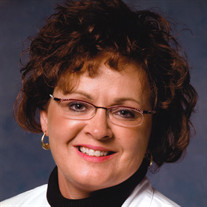 RIGA- Gloria Sell age 58, of Riga, passed away at home on Tuesday, November 5, 2019. She was born on June 20, 1961 to George and Veronice (Rayburn) Davis, Jr. in Ashland, Kentucky. On April 25, 1981, Gloria married Thomas Alan Sell in Toledo, Ohio; and they have shared 38 wonderful years together and raised three amazing sons. Gloria went on to earn her Associate’s Degree in Nursing from Monroe Community College and her Bachelor of Science in Nursing from Lourdes College; she was the Director of Nursing at Divine Health Care in Sylvania. Gloria previously attended Whiteford Wesleyan Church, in Ottawa Lake. She was a member of the Sylvania Moose Lodge #1579. Gloria loved her family and cherished the time together with her children and grandchildren. When the family was young, Gloria and Tom were hockey parents and traveled with their sons to various hockey rinks. Once the kids were grown and out of the house they found the time to take several cruises. Gloria enjoyed going to MGM Casino, dancing whenever possible and golfing. She is survived by her husband, Tom; mother, Veronice; children, Gregory (Jaclyn) of Commerce Township, Matthew of Ottawa Lake, and Ryan (Danielle) of Toledo; granddaughters, Gianna and Myla ; siblings, Dan Davis, Luke (Emily) Davis, Joel Davis (Jennifer), John Davis and Amanda (James) Scott. Gloria was preceded in death by her father, George and sister, Peggy Sue Davis. Funeral services will be held on Monday, November 11, 2019, at 11 a.m. at Wagley Funeral Home Tagsold Chapel, Blissfield. Burial will follow at Riga Cemetery. Visitation will take place on Sunday, November 10, 2019, from 2 to 6 p.m.at the funeral home. Memorial contributions in Gloria’s memory may be made to Give Kids the World Village. Online condolences and memories may be shared at www.WagleyFuneralHomes.com.

The family of Gloria Ann Sell created this Life Tributes page to make it easy to share your memories.

Send flowers to the Sell family.