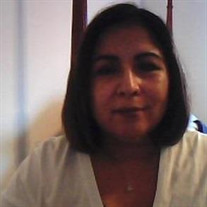 YPSILANTI – Gloria Hernandez, age 59, of Ypsilanti, passed away at home under the loving care of her family and Arbor Hospice on Thursday, January 19, 2017. Born November 11, 1957, in Adrian, she was the daughter of Johnny A. and Mary Hernandez. Gloria was a 1978 graduate of Madison High School and received her Associates Degree in Criminal Justice from Jackson Community College. She worked as a Corrections Officer for the State of Michigan in multiple facilities throughout the area, including Jackson Central Prison and Gus Harrison Regional Facility in Adrian, and later retired after 25 years in Corrections at CFP. Gloria is survived by her mother, Mary Hernandez of Adrian; her daughters, Destiny Smith-Jackson of Clarksville, TN, Christina Cortez of Ypsilanti, MI, and Gege Cortez-Larkin of Clarksville, TN; seven grandchildren, Tyra, Aliyah, Arianna, C.J., Jacob, Haley, and Amiyah; her siblings, Johnny Garcia, David Hernandez, Olga Hernandez-Riddle, and Michael Hernandez; and several nieces, nephews, and cousins. She was preceded in death by her father, Johnny A. Hernandez; her uncle, Joe Trevino; and her cousin, Mary Hernandez. Gloria was a strong woman that loved her kids and grandchildren dearly. She enjoyed traveling the world and making every day an adventure. She spread strength and inspiration everywhere she went with her beautiful smile. She will be deeply missed. At Gloria’s request, cremation has taken place. A Memorial Service will take place at 3:00 p.m. on Saturday, January 28, 2017 at Wagley Funeral Home, Tagsold Chapel in Blissfield. A memorial visitation will take place at the funeral home on Saturday, from 2:00 p.m. until the time of the service. The family suggests memorial contributions be made to the MDS Foundation and to the family. Envelopes are available at the funeral home. Arrangements have been entrusted to Wagley Funeral Home, Tagsold Chapel where online condolences and memories may be shared at www.WagleyFuneralHomes.com.

YPSILANTI &#8211; Gloria Hernandez, age 59, of Ypsilanti, passed away at home under the loving care of her family and Arbor Hospice on Thursday, January 19, 2017. Born November 11, 1957, in Adrian, she was the daughter of Johnny A. and Mary... View Obituary & Service Information

The family of Gloria Hernandez created this Life Tributes page to make it easy to share your memories.

Send flowers to the Hernandez family.