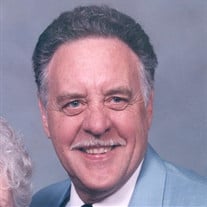 ADRIAN – Glenn A. Gurney went to be with his Lord and Savior, Jesus Christ, February 27, 2019, at the age of 90. He was born November 19, 1928, in Simcoe, Ontario, Canada, the son of Archibald and Jean (Leatherdale) Gurney, and he served in the United States Army from 1953 to 1955. On October 8, 1955, he married Noreen Gaul, and they celebrated over 57 years together before her death in 2013. Glenn owned and operated The Peak Sports and Fashions Inc. in Adrian and Hillsdale for almost 30 years. He was a member of American Legion Post #97, and a former member of the Loyal Order of Moose Lodge #1034. He attended Maple Avenue Bible Church. Glenn is survived by his sons, Wade (Laura) Gurney and Brett Gurney, both of Adrian; three grandchildren, Tera, Brandon (Kari) and Julia; and sisters, Colleen Conlin and Marion (Keith) Martin, both of Canada. In addition to his parents and wife, Noreen, he was preceded in death by a brother, Wayne. At Glenn’s request, cremation will take place and there will be no services at this time. Arrangements have been entrusted to Wagley Funeral Home where online condolences and memories may be shared at www.WagleyFuneralHomes.com.

The family of Glenn A. Gurney created this Life Tributes page to make it easy to share your memories.

ADRIAN – Glenn A. Gurney went to be with his Lord and Savior,...

Send flowers to the Gurney family.