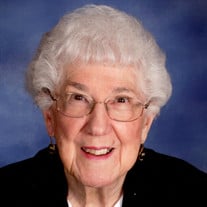 BLISSFIELD—Glendora Ruth Klump, 93, of Blissfield, died Friday, January 3, 2020, at Blissfield Place. She was born August 25, 1926, in Ogden Township, to the late Wesley and Zelma (Sell) Scholl. She married Irvin E. Klump on July 26, 1947, and he preceded her in death on August 2, 2002. Glendora worked as a bookkeeper for the former Sax-Mayer Company and National Bundle Tyer Company in Blissfield. She was a faithful member of the Emmanuel United Methodist Church, where she served as the longtime organist. She was skilled the domestic duties of sewing, cooking, and baking, and she loved attending various sporting events and school activities that involved her children and later her grandchildren. In retirement, she enjoyed annual trips across the United States visiting Irvin’s Army reunions, as well as vacationing in Michigan’s Upper Peninsula at the Hiawatha Sportsman’s Club. Surviving is a son, Larry (Tina) Klump of Blissfield; a sister, Rosie Maloney of Blissfield; four grandchildren, Amy Janczarek of Grand Blanc, MI, Amanda (Stan) Apostolakos of Kansas City, KS, Trevor (Savannah) Klump of Westland, MI, and Jared (Natasha) Klump of Blissfield; and six great-grandchildren, Chora, Henry, Charlotte, Wyatt, Emerald, and Easton. She was preceded in death by her birth parents and her step-father, Warren Phillips; her husband, Irvin; a son in infancy, Edmund; a daughter and son-in-law, Vicki (Fred) Everly; and two sisters, Marlene Keller and Marjorie Cole. A funeral service for Glendora will be held Monday, January 6, 2020, at 11:00 a.m. at the Wagley Funeral Home Tagsold Chapel, Blissfield, with Pastor Devin Smith officiating. Burial will follow in Pleasant View Cemetery, Blissfield. Visitation will be held Sunday, from 6-8 p.m. Memorial contributions in Glendora’s memory may be made to Careline Hospice, Emmanuel United Methodist Church, or Blissfield Place. Online condolences and memories may be shared at www.WagleyFuneralHomes.com.

The family of Glendora R. Klump created this Life Tributes page to make it easy to share your memories.

Send flowers to the Klump family.