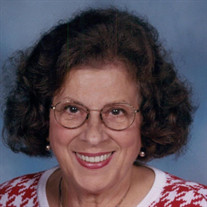 BLISSFIELD – Gianna Cristofani Monroe, 92, of Blissfield, returned to her Heavenly Home on February 24, 2021, under the care of ProMedica Goerlich Center and ProMedica Hospice. Gianna was born on August 5, 1928, in Rome, Italy, to Umberto and Teresa Cristofani. She met Bruce Monroe in Rome where he was stationed in the Army and they were married at Piazza del Campidoglio, Rome on February 28, 1959. After marrying, they moved to Itmann, West Virginia for a short time, before relocating to Blissfield, Michigan in 1960. There they settled and had twins, Tracy and Sabrina. Gianna was a homemaker and seamstress. She was a member of the Extension Group of Blissfield as well as a lifetime member of Light of Christ Catholic Parish, St. Peter the Apostle Church in Blissfield, belonging to its Ladies Sodality and Altar and Rosary Society. She was very much involved in the planning of many funeral luncheons for fellow parishioners along with delivering lunches for the Meals on Wheels program. Gianna is survived by her children, Tracy Monroe (Tim Deeter) of Lafayette, IN, and Sabrina (Joe) Del Rosario of Long Beach, CA; sisters, Pina Maraschi and Anna (Sergio) Maraschi of Rome, Italy. We will miss her the rest of our lives, but we gain strength, joy, comfort and hope that we will see her again in the Kingdom of Heaven. There she now joins her mother and father; her beloved husband Bruce Monroe; sister, Marisa (Alex) Vince; brother Giovanni (Silvana) Cristofani; brothers-in-law, Franco Maraschi, James (Marie) and (Edith) Monroe, and Danny (Jean) Monroe; and sisters-in-law, Betty Robinson (James Chester) and Emma Jane (Harry) Odom. A private Rite of Committal will be held at Pleasant View Cemetery in Blissfield with Fr. Jeffrey Poll presiding. Arrangements have been entrusted to the care of Wagley Funeral Home, Tagsold Chapel in Blissfield. Memorial contributions may be made to Light of Christ Catholic Parish or to Hospice of Lenawee. Online memories and condolences may be shared at www.WagleyFuneralHomes.com.

BLISSFIELD &#8211; Gianna Cristofani Monroe, 92, of Blissfield, returned to her Heavenly Home on February 24, 2021, under the care of ProMedica Goerlich Center and ProMedica Hospice. Gianna was born on August 5, 1928, in Rome, Italy, to Umberto... View Obituary & Service Information

The family of Gianna Cristofani Monroe created this Life Tributes page to make it easy to share your memories.

Send flowers to the Monroe family.