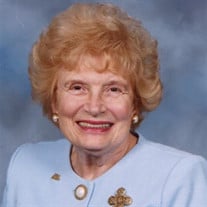 BLISSFIELD - Geraldine Naomi Drefke, age 93, passed away on June 8, 2018 in Fort Wayne, IN. Her funeral service will be June 11, 2018 at 3 p.m. at St. Paul’s Lutheran Church, Blissfield, MI. A visitation of her family and friends will be at St. Paul’s before the service from 1 to 3 p.m. She will be laid to rest at Pleasant View Cemetery. Geraldine was born on December 27, 1924 in Alpena, MI to the Rev. William Weinlander and Amalia Steutzer Weinlander. She received a teaching certificate from Lenawee County Normal in Adrian, MI, a bachelor’s degree in Education from Capital University in Columbus, OH, and a Masters degree in Curriculum and Supervision from Wright State University in Dayton, OH. During her 27 years of teaching, Gerry influenced countless students with her positive, can-do spirit in Riga, MI, Logan, OH, and Dayton, OH. She would start their day with cheer songs and encourage them throughout the day to never, never give up. On April 15, 1944, Geraldine married Willard Owen Drefke. They shared 56 years together, serving God and raising a family. After Willard became a Lutheran minister, Gerry supported his ministry for 35 years as they served congregations in Arlington, OH, Logan, OH, and Dayton, OH. In addition, Gerry served others by using her natural skills as a salesperson, selling health products and food supplements. Upon her retirement from teaching in 1990, Willard and Gerry moved back to the farm in Blissfield, MI where Willard was raised. They enjoyed being with their family, dancing, playing cards, and traveling. After the passing of Willard, Gerry met Elwyn Gafner while playing cards, and they were married in 2003. They enjoyed playing cards together and spending their winters in Florida. Gerry’s favorite thing to do was to document every activity and event with pictures and then relive all her memories through those pictures. Anyone who knew Gerry, knew that she was a positive thinking person with an affirmation for any circumstance! If asked how she was, she would reply, “I feel, healthy, happy, and terrific...and rich!” Over the years, the answer to that question grew to a list over 30 adjectives. She loved God, her family, and life, and was always willing to help anyone in need. She fervently professed her faith in Jesus Christ and shared that faith with her children, grandchildren, and all whom she met. She is survived by her sons, David (Judy) and John (Theresa) Drefke; daughter, Sally (Ted) Wilson; grandchildren, Richard, Robert, Steven, Michelle, Amy, Karen, Christopher, Kathleen, Austin and Lauren; and seven great-grandchildren. Geraldine was preceded in death by her husbands, Willard and Elwyn; son, Donald; a daughter in infancy, Kay; great grandson, Zachary; and siblings, Ruth Ingram, Vera Greenwood, William Weinlander and Arlene Eklund. Memorials in Geraldine’s name may be made to St. Paul’s Lutheran Church, Blissfield, MI. Arrangements have been entrusted to Wagley Funeral Home, Tagsold Chapel in Blissfield where online condolences and memories may be shared at www.WagleyFuneralHomes.com.

The family of Geraldine Naomi Drefke created this Life Tributes page to make it easy to share your memories.

Send flowers to the Drefke family.