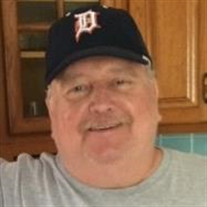 PALMYRA – Gerald W. “Jerry” Goodfriend, age 58 of Palmyra, passed away peacefully January 8, 2019 at the Hospice of Lenawee Home. He was born June 19, 1960 to Henry and Bernadine (Wojtaszek) Goodfriend, and graduated in 1979 from Blissfield High School. In 1979 he married Gay Schwamm. On February 15, 2002, Jerry married Juanita Fraley, and she survives. Jerry worked as a cross-country truck driver for 28 years. He was a member of the Sons of American Legion Squadron #325 in Blissfield and the VFW Annis-Fint Post #1584 in Adrian. Jerry loved his sports teams: University of Michigan football, Detroit Lions and Detroit Tigers. He enjoyed being up north, fishing, hunting, and watching the birds, turkeys and deer around his home. Jerry made everyone laugh and enjoyed the friendship of many. He is survived by his wife, Juanita; sister, Jeannie Hensley of Sturgis, MI; brother, Jimmy (Cathy) Goodfriend of Adrian; sons, Brian (Crystal) Goodfriend and Josh (Kinzi) Goodfriend, both of Blissfield; and four grandchildren: Sierra, Brianna, Aaron and Logan. He was preceded in death by his parents; brother, Kenny; and brother-in-law, Jon Hensley. A memorial service will take place at 2 p.m., Sunday, January 13, 2019 at Wagley Funeral Home, Tagsold Chapel in Blissfield with Rev. Jeff Poll presiding. Visitation will be held at the funeral home Sunday from noon until the service at 2 p.m. In lieu of flowers, memorial contributions are suggested to Hospice of Lenawee. Online condolences and memories may be shared at www.WagleyFuneralHomes.com.

The family of Gerald W. "Jerry" Goodfriend created this Life Tributes page to make it easy to share your memories.

Send flowers to the Goodfriend family.