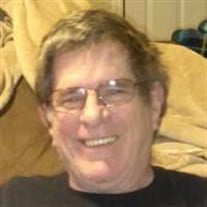 BLISSFIELD – Gerald R. “Jerry” LaMontaine, age 60 of Blissfield, passed away suddenly, Wednesday, March 7, 2018. He was born December 14, 1957, in Detroit, MI to Ronald and Cecelia (White) LaMontaine. After graduating from Garden City West Senior High School, he was proud to join the United States Air Force where he served in Germany. On March 24, 2000, he married Carrie Giberson in Toledo, and she survives. Jerry worked for Tecumseh Products for several years and was currently working at L & W Engineering in Blissfield. He was a great Red Wings Hockey fan and enjoyed staying connected with his Air Force family and friends through the internet. Jerry loved his family and especially treasured time with his grandchildren. In addition to Carrie, his wife of 18 years, he is survived by his children: Stacy (Eric) Lichtenwald, Jeremy, Jenna, and Kimberly LaMontaine (Jacob Hensley), Michael and Melissa Francoeur and Kristi (Daren) March; numerous grandchildren; two sisters, Vickie (Bruce) Robbins and Susan LaMontaine; and many nieces and nephews. He was preceded in death by his parents; a sister, Debra LaMontaine and a brother, Toby LaMontaine. Funeral services will take place at 2 p.m., Sunday, March 11, 2018 at Wagley Funeral Home, Tagsold Chapel in Blissfield, with Rev. Larry Betz officiating and military honors conducted by American Legion Post #325. Burial will be private. Visitation will be held at the funeral home Saturday from 2 to 8 p.m. and again Sunday from 1 p.m. until the service. Online condolences and memories may be shared at www.WagleyFuneralHomes.com.

The family of Gerald R. "Jerry" LaMontaine created this Life Tributes page to make it easy to share your memories.

Send flowers to the LaMontaine family.