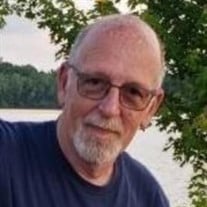 ADRIAN –Gerald “Jerry” Silas Ganun, 68, of Adrian, died suddenly on Wednesday, August 11, 2021 in Grayling, Michigan. He was born on December 17, 1952 to Francis and Julia (Wilson) Ganun of Blissfield. Jerry graduated from Blissfield High School with the Class of 1971. On February 14, 1976 Jerry married his sweetheart, Connie Sue Spohr in Hudson; and they have shared over 45 years together in creating a beautiful family with many wonderful memories. Jerry liked working and being around people. He retired from Merillat Cabinets after 37 years as a fork lift operator. He continued to deejay at Adrian Skatery and was still working part-time at Gill-Roy’s in Blissfield. Throughout his life, Jerry gave back to his community; he was a Cambridge Township Fire Fighter for over 20 years and also worked as an EMT for Lenawee County Ambulance. Jerry was an avid woodworker and participated in many craft shows with his daughter, Jill; he also enjoyed ATV riding, kayaking and fishing with his daughters and grandchildren. In addition to his wife, Connie, Jerry is survived by his daughters, Jennifer Ganun and Jill (Lance) Feltman; grandchildren, Abigail Feltman, Ethan Feltman, Jasmin Poley, Jayden Poley and Hunter Ganun; siblings, Judie Woerner, Tom Ganun and Bill Ganun. Jerry was preceded in death by his parents and daughter, Jolene Ganun. Funeral services for Jerry will be on Tuesday, August 17, 2021, at 2 p.m. at Wagley Funeral Home, Tagsold Chapel in Blissfield. Burial will follow at Pleasant View Cemetery in Blissfield. Visitation will take place on Monday, August 16, 2021 at the funeral home from 2-4 p.m. and 6-8 p.m.; with a Fire Fighter walk-through taking place at 7 p.m. Memorial contributions may be made in Jerry’s honor to the Cambridge Township Fire Department or to the Cystic Fibrosis Foundation. Online condolences and memories may be shared at www.WagleyFuneralHomes.com.

The family of Gerald "Jerry" Silas Ganun created this Life Tributes page to make it easy to share your memories.

Send flowers to the Ganun family.