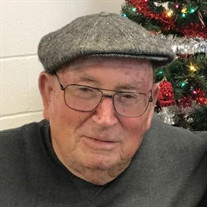 ADRIAN – Gerald Franklin Dohm, age 92, entered eternal life on June 11, 2021 at his home in Adrian, MI under the care of Hospice of Lenawee and family by his side. He was born in Adrian, MI, the son of the late Don and Faye (Delcamp) Dohm on March 28, 1929. On November 19, 1951 he married Barbara Pifer and to this union they were blessed with two children, Gregory and Charon. On October 20, 1979, he was united in marriage to Carol Etter, and welcomed her three children, Cindy, Mike and Tim, as his own. Gerald was drafted into the United States Army in 1951 and proudly served his country in the Korean War. He was a life member of VFW Post 1584, Adrian. Gerald held many occupations in his lifetime, but the one he was most proud of was serving his community as Assistant Fire Chief of Adrian Rural Township. His hobbies included collecting Emmet Clowns, working on small engines and his favorite was working in his workshop; crafting many things from wood to gift to his family and to sell at craft shows. He also looked forward to deer hunting season, where he would go Up North with family and friends. After his retirement, he and his wife, Carol, enjoyed spending the winter months in Myrtle Beach, SC, where they met many new friends. In addition to his wife, Carol, Gerald is survived by his children, Gregory (Gail) Dohm, Charon Dohm-Welsh, Cindy Dumire, Michael (Teresa) Etter, and Tim (Jamie) Etter; many grandchildren, great-grandchildren, and great-great-grandchildren; and numerous nieces, nephews, and cousins. Gerald was preceded in death by his parents; brother, Carl; sisters, Mae, Esther, and Marie; son-in-law, Terry Dumire; Grandson, James Herron, Jr.; granddaughter, Chanda DeVore; and great-grandson Joseph Paulding. Funeral Services for Gerald will take place on Wednesday, June 16, 2021 at 11:00 a.m. at Wagley Funeral Home, Adrian with his nephew, Pastor David Morton officiating. Burial will follow at Saint Joseph Catholic Cemetery with military honors provided by the Annis-Flint Post #1584 and the American Legion Post #97 of Adrian. Visitation for Gerald will take place on Tuesday, June 15, 2021 from 3:00 to 7:00 p.m. at the funeral home, and again on Wednesday beginning at 10:00 a.m. and continuing until the time of the service. A live streaming of the service will be accessible from Gerald’s tribute wall on www.WagleyFuneralHomes.com, beginning at the time of the service, where a link to view the recording will be available for 90 days. To honor Gerald’s memory, the family suggests that memorial contributions be made to Hospice of Lenawee, whom the family would like to thank for the love and care they provided to their beloved father and husband. Online condolences and memories may be shared at www.WagleyFuneralHomes.com.

ADRIAN &#8211; Gerald Franklin Dohm, age 92, entered eternal life on June 11, 2021 at his home in Adrian, MI under the care of Hospice of Lenawee and family by his side. He was born in Adrian, MI, the son of the late Don and Faye (Delcamp)... View Obituary & Service Information

The family of Gerald Franklin Dohm created this Life Tributes page to make it easy to share your memories.

Send flowers to the Dohm family.