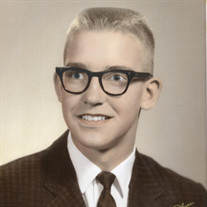 ONSTED—George M. Anderson, 71 of Onsted, passed away on Sunday, March 15, 2020, under the care of his loving wife, Susan. Born on November 24, 1948, in Ypsilanti, MI, he was the son of the late Tom E. and Betty Ann (Scharp) Anderson. On May 25, 1968, at the age of 19, George married his lifelong love, Susan K. Peasley in Ypsilanti, MI. He attended Eastern Michigan University for two years and then proudly served his country in the Army from 1968 to 1970. He returned to EMU, where he received his Bachelor of Criminal Justice degree. George proudly served as an Ann Arbor City police officer for thirteen years. He was a lifelong member of the Free Methodist Church and founder of the Chelsea Free Methodist Church. He enjoyed hunting and was an avid deer watcher. He had a good work ethic and was fair and honest to everyone he met. In addition to his wife, Susan, he is survived by his children, Matthew (Debra) Anderson of Adrian, Ryan “Cole” (Tish) Anderson of Napoleon, MI; five grandchildren and three great-grandchildren; and his brothers, Rudy (Linda) Anderson and Jeff Anderson. He was preceded in death by his parents and infant son, Wade Eldon Anderson. Funeral services for George will be at noon, Wednesday, March 18, 2020, at Wagley Funeral Home, Adrian, with Pastor Mark Murphy officiating. Visitation will be from 10 a.m. until the time of the service. Burial will follow at Oakwood Cemetery, Adrian. In lieu of flowers, gifts may be given to the family or a charity of their choice. Online memories and condolences may be shared at www.WagleyFuneralHome.com.

The family of George Merlin Anderson created this Life Tributes page to make it easy to share your memories.

ONSTED—George M. Anderson, 71 of Onsted, passed away on Sunday,...

Send flowers to the Anderson family.